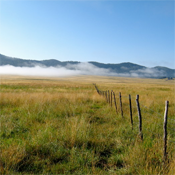 The motivation for the next version of the model, CLM4, was to (1) incorporate several recent scientific advances in the understanding and representation of land surface processes, (2) expand model capabilities, and (3) improve surface and atmospheric forcing datasets (Lawrence et al. 2011). Included in the first category are more sophisticated representations of soil hydrology and snow processes. In particular, new treatments of soil column-groundwater interactions, soil evaporation, aerodynamic parameters for sparse/dense canopies, vertical burial of vegetation by snow, snow cover fraction and aging, black carbon and dust deposition, and vertical distribution of solar energy for snow were implemented. Major new capabilities in the model include a representation of the carbon-nitrogen cycle (CLM4CN, see next paragraph for additional information), the ability to model land cover change in a transient mode, inclusion of organic soil and deep soil into the existing mineral soil treatment to enable more realistic modeling of permafrost, an urban canyon model to contrast rural and urban energy balance and climate (CLMU), and an updated biogenic volatile organic compounds (BVOC) model. Other modifications of note include refinement of the global PFT, wetland, and lake distributions, more realistic optical properties for grasslands and croplands, and an improved diurnal cycle and spectral distribution of incoming solar radiation to force the model in offline mode.

Many of the ideas incorporated into the carbon and nitrogen cycle component of CLM4 derive from the earlier development of the offline ecosystem process model Biome-BGC (Biome BioGeochemical Cycles), originating at the Numerical Terradynamic Simulation Group (NTSG) at the University of Montana, under the guidance of Prof. Steven Running. Biome-BGC itself is an extension of an earlier model, Forest-BGC (Running and Coughlan, 1988; Running and Gower, 1991), which simulates water, carbon, and, to a limited extent, nitrogen fluxes for forest ecosystems. ForestBGC was designed to be driven by remote sensing inputs of vegetation structure, and so used a diagnostic (prescribed) leaf area index, or, in the case of the dynamic allocation version of the model (Running and Gower, 1991), prescribed maximum leaf area index.

CLM4 was released to the community in June, 2010 along with the Community Climate System Model version 4 (CCSM4). CLM4 is used in CCSM4, CESM1, CESM1.1, and remains available as the default land component model option for coupled simulations in CESM1.2.