The Open Geospace General Circulation Model (Open GGCM) was originally developed as a magnetohydrodynamic (MHD) model of Earth's magnetosphere at UCLA in the early 1990's by J. Raeder.

The Open Geospace General Circulation Model (Open GGCM) was originally developed as a magnetohydrodynamic (MHD) model of Earth's magnetosphere at UCLA in the early 1990's by J. Raeder. Besides solving the resistive MHD equations in the magnetosphere the model included a rather crude ionospheric boundary condition consisting of a ionosphere potential solver that served to close the magnetospheric field-aligned currents in the ionosphere and thus coupled magnetospheric convection with ionospheric convection. Subsequently the ionosphere end of the model was improved by adding a magnetosphere-ionosphere coupling module that not only mapped the field-aligned currents into the ionosphere and the potential back into the magnetosphere, but also computed electron precipitation parameters and the ionospheric Hall and Pedersen conductances using empirical relations in a self-consistent manner. In the late 90's this model was coupled with CTIM (Coupled Thermosphere Ionosphere Model, developed by T. Fuller-Rowell, NOAA/SEC), a sophisticated three-dimensional dynamical models of the thermosphere and ionosphere. CTIM takes the potential and the electron precipitation parameters from the MHD model and provides in turn the conductances and the ionospheric dynamo current to the potential solver. CTIM thus replaces the empirical conductance calculations with first-principle calculations. However, it also adds substantial physics to the model, and its outputs are highly relevant space weather parameters, such as the ionospheric electron parameters (Nmf2, hmf2) and neutral densities and composition. The coupled model was known for some time as the UCLA/NOAA GGCM and is now Open GGCM.

Basic model concept:
For the numerical details we refer to the literature cited below. Briefly, the magnetospheric part solves the MHD equations on a stretched Cartesian grid using second order explicit time integration with conservative and flux-limited spatial finite differences. A Yee grid is used to preserve the magnetic field divergence to round-off error. The code is parallelized using the message passing interface (MPI) and runs on a large variety of computers that support MPI. Currently the code is used on IBM-SP2, IBM-p690, SGI-Origin2000, HP/alpha based machines, and on a variety of Intel or AMD based Beowulf clusters. The code scales well up to 100s of processors on machines with high speed interconnect (IBM, SGI, Myrinet clusters), and up to several 10s of CPUs on Gbit Ethernet based clusters. The numerical grid is adaptable and can have from a few times 10^5 to more than 10^8 cells. Correspondingly, the resolution in the MHD grid near the sub-solar magnetopause can be as small as 100 km or as large as 0.5 RE. The code is robust and efficient. Real-time operation can be achieved with a moderately fine grid (~10^6 cells) using about 20 CPUs. At the ionosphere side, the code can either be run with uniform conductance, an empirical conductance model, or with CTIM. 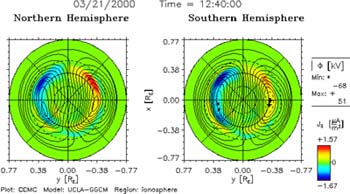 Model use and outputs:
The output of the model consists of snapshots of the full 3d grid of the primary variables (density, pressure, velocity, magnetic field, current density), snapshots on pre-defined 2d cuts perpendicular to any of the axes, snapshots of the ionospheric quantities (FAC, potential, electron precipitation fluxes and energies, ground magnetic perturbations), and if run with CTIM, also snapshots of the CTIM variables (neutral density, composition, winds, temperature, ion and electron densities and temperatures). Since the output can be virtually unlimited a judicious choice must be made before each run of which parameters are needed for analysis and at which cadence. It is easily possible to create 100GB or more with one run.

Model Input
Inputs to Open GGCM are solar wind plasma and magnetic field conditions propagated from a solar wind monitor satellite to the upstream simulation box boundary. The Earth magnetic field is approximated by a dipole with fixed orientation during the entire simulation run. The orientation angle can be specified independently from the time interval simulated.

Derived Quantities:
Numerous quantities can be derived from the primary outputs. Of particular interest are: (i) magnetic field topology, (ii) the open-closed (polar cap) boundary in the ionosphere, (iii) auroral luminosity, and (iv) ground magnetic perturbations. Most of these quantities require some post-processing, for example, tracing of a large number of field lines.

Limitations and Caveats
The model does not include the energetic particle drift and ring current physics. Thus, results within about 5 RE from Earth are generally meaningless. Likewise, there is no plasmasphere. This should not affect the dynamics of the magnetosphere much, however, wave propagation through the inner magnetosphere is affected. Also, the model uses a `Boris correction' to keep time steps manageable. As a consequence wave propagation in the inner magnetosphere is artificially slowed. The developers do not provide any guarantee for the correctness of model results. There are many more caveats of various natures than listed here. Users of the model are therefore highly encouraged to contact the developers and discuss results with them prior to any publication. Users should also consult the Open GGCM web site.