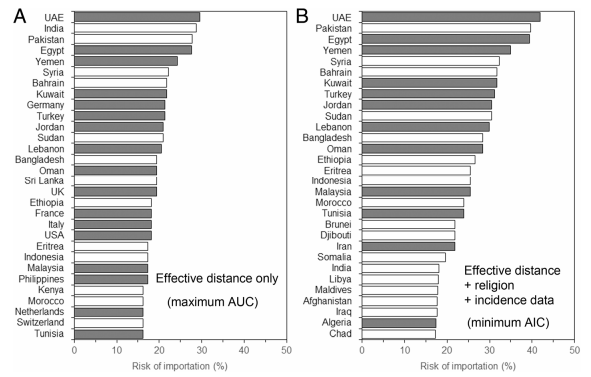 The Middle East respiratory syndrome (MERS) associated coronavirus has been imported via travelers into multiple countries around the world. In order to support risk assessment practice, the present study aimed to devise a novel statistical model to quantify the country-level risk of experiencing an importation of MERS case.

Here we describe the proposed model aimed to predict the risk of importation in each country. Let Fj,t be the cumulative distribution function representing the probability that MERS has already been imported to country j by discrete day t. The day t = 0 corresponds to the date of the illness onset of first identified MERS case, and throughout the present study, we set 3 September 2015 as day zero (i.e. the date on which the initially identified case experiences symptoms). Although a few earlier cases were confirmed as MERS by inspecting laboratory data a number of days after their dates of death, dates of illness onset among deceased cases were unavailable and had to be discarded when calculating the arrival time. Using Fj,t, the probability that a country j has not yet imported MERS by day t is

We parameterized the daily risk λ by examining the statistical performance of different types of model parameterizations. In all models that we examined, we use the so-called “effective distance”, initially proposed by Brockmann and Helbing. The metric is derived from the airline transportation network, originally based on itinerary data, by using the transition matrix and length of paths between countries. The effective length of a path {n1, n1, ⋯, nL} is given by

where Pji denotes the conditional probability that an individual that left i moves to j. (Note that ∑jPji = 1). Assuming that the number of passengers is identical among all international flights, the transition matrix is calculated as

where k is a constant. Namely, the hazard is an inverse function of the effective distance. As an alternative model, the information of Muslim majority countries is added, labeling corresponding countries at greater risk as compared with other countries, because countries sharing the religion with Saudi Arabia may be at greater risk of exposure to cases (e.g. through Hajj). As a consequence, a linear weight α is given on Muslim majority countries, i.e.,

as the model 3, where It is the incidence of MERS in Saudi Arabia on day t. Since the original incidence data were recorded weekly (while our model is written on the daily basis), the weekly incidence was transformed to the daily data assuming uniform distribution of incidences within each week. Model 4 incorporates both of abovementioned factors into the model, i.e.,