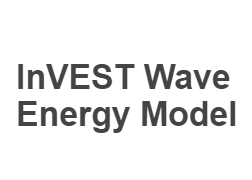 The InVEST Wave Energy model measures and values the electricity generation potential of ocean waves. For each specified region, the model estimates expected wave power and harvested energy, and calculates the net present value of constructing and operating a wave energy conversion facility.

Decision-makers and the public are increasingly interested in converting wave energy into electricity, with the hope that ocean waves will be a source for clean, safe, reliable, and affordable energy. The goals of the InVEST wave energy model (WEM) are to map and value the energy provisioning service provided by ocean waves and to allow for the evaluation of trade-offs that might arise when siting wave energy conversion (WEC) facilities. The WEM assesses potential wave power and harvested wave energy based on wave conditions (e.g., significant wave height and peak wave period) and technology-specific information of WEC devices (e.g., performance table and maximum capacity). The model then evaluates the net present value (NPV) of building and operating a WEC facility over its life span using economic parameters (e.g., price of electricity, discount rate, as well as installation and maintenance costs). Obtaining accurate input data and parameters for the economic valuation portion of the model is a significant challenge because there have been no commercial-scale wave energy facilities implemented to date. We recommend using the NPV values of a wave energy facility computed with the default values be used to only to make relative comparisons between sites. The outputs of the WEM provide spatially explicit information, showing potential areas for siting WEC facilities with the greatest energy production and value. This site- and device-specific information for the WEC facilities can then be used to identify and quantify potential trade-offs that may arise when siting WEC facilities. Decision-makers and stakeholders can use the WEM to better understand where to install a WEC facility with greatest harvested wave energy and least effect on coastal and ocean ecosystems and other human uses.

Wave Energy has a 3.0 prototype which can be found in the InVEST 3.x.x folder. New features to the 3.0 version include:

If you encounter any issues please post to the user’s support forum at http://forums.naturalcapitalproject.org/

Wave energy has many characteristics important to the efficient generation of electricity and is considered a potentially significant contributor to the effort to meet growing human energy demands (Barstow et al. 2008). Among various renewable energy resources, wave energy has the greatest power density and provides relatively continuous and predictable power-significant advantages for electrical grid operation (Bedard et al. 2005). The cost of electricity generated by wave energy has decreased since the 1980s and is likely to decrease further as the technology develops and the wave energy industry expands (Thorpe 1999). Considering the increasing cost of fossil fuel energy and concomitant interest in renewable energy sources, wave energy may be economically feasible in the near feature. As a consequence, decision-makers and the public are increasingly interested in converting wave energy into electricity with the hope that ocean waves will be a source for clean, safe, reliable, and affordable energy source without significant greenhouse gas emissions. With this increasing interest in wave energy as a renewable energy resource, there is a growing need for a framework to help decision-makers site wave energy facilities. The WEM we articulate here will provide planners with information that can be used to balance the harvesting of energy from waves with existing uses of marine and coastal ecosystems.

A variety of technologies for WEC devices have been proposed to capture the energy from waves, and the particular characteristics of these devices play a critical role in quantifying the amount of energy that can be captured. Therefore, the choice of WEC device is also an essential component in efficiently harvesting wave energy under different wave conditions by location.

The economic valuation of a wave energy facility can be used to compare the net benefits across sites and device-specific technologies. As with most renewable energy projects, many different factors can be included in the economic valuation. These include: the value of energy provided to the electricity grid, reduction in pollution associated with wave energy projects as compared to traditional sources, costs to those who lose access to coastal and marine locations, and environmental costs associated with the construction and operation of these facilities. In practice, including all the relevant benefits and costs, particularly those related to environmental benefits and costs, can be difficult to measure and include in a formal cost-benefit analysis. Rather than ignoring these potential impacts, we have taken a simple approach to incorporating some of this information in a framework that can be used in parallel to a formal cost-benefit analysis.

While wave energy may provide clean and renewable energy without significant greenhouse gas emissions, wave energy projects may conflict with existing ocean uses or conservation strategies for protecting marine species and habitats. WEC facilities have the potential to impact fishing opportunities, pelagic and benthic habitat, recreational activities, aesthetic views, hydrodynamic and wave environments, navigation, and the bioaccumulation of toxic materials (Boehlert et al. 2007; Nelson et al. 2008; Thorpe 1999). The severity of these potential impacts is likely to be site specific. Also, given limited experience with wave energy projects to date, there is little empirical evidence describing impacts. Therefore, identifying and evaluating the potential trade-offs associated with siting WEC facilities is an essential component of marine spatial planning and other forms of decision-making in marine and coastal environments.

The WEM presented here assesses: 1) potential wave power, 2) harvested wave energy, and 3) the net present value of a WEC facility. The outputs of the WEM provide spatially explicit information, showing potential areas for siting WEC facilities with the greatest energy production and benefits. This site- and facility-specific information then can be used to evaluate how siting a WEC facility might influence and/or change existing coastal and marine uses. For example, the WEM allows users to explore potential trade-offs by mapping and quantifying spatial competition with existing ocean uses for commercial and recreational activities (e.g., fishing, navigation, whale watching, kayaking, etc.).

The objective of the WEM is to help facilitate marine spatial planning in the context of wave energy projects by exploring potential costs and benefits of siting wave energy facilities. The model can run using default input data sets that are globally and regionally available or with local input data.