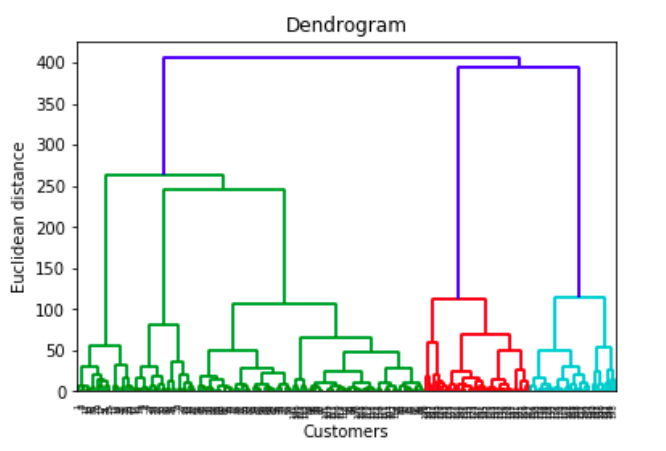 In general, the merges and splits are determined in a greedy manner. The results of hierarchical clustering are usually presented in a dendrogram.

memory, which makes it too slow for even medium data sets. However, for some special cases, optimal efficient agglomerative methods (of complexity {\displaystyle {\mathcal {O}}(n^{2})}

) are known: SLINK for single-linkage and CLINK for complete-linkage clustering. With a heap, the runtime of the general case can be reduced to {\displaystyle {\mathcal {O}}(n^{2}\log n)}

, an improvement on the aforementioned bound of {\displaystyle {\mathcal {O}}(n^{3})}

, at the cost of further increasing the memory requirements. In many cases, the memory overheads of this approach are too large to make it practically usable.

Except for the special case of single-linkage, none of the algorithms (except exhaustive search in {\displaystyle {\mathcal {O}}(2^{n})}

) can be guaranteed to find the optimum solution.

, but it is common to use faster heuristics to choose splits, such as k-means.

The choice of an appropriate metric will influence the shape of the clusters, as some elements may be relatively closer to one another under one metric than another. For example, in two dimensions, under the Manhattan distance metric, the distance between the origin (0,0) and (.5, .5) is the same as the distance between the origin and (0, 1), while under the Euclidean distance metric the latter is strictly greater.

Some commonly used metrics for hierarchical clustering are:

For text or other non-numeric data, metrics such as the Hamming distance or Levenshtein distance are often used.

The linkage criterion determines the distance between sets of observations as a function of the pairwise distances between observations.

Some commonly used linkage criteria between two sets of observations A and B are:

where d is the chosen metric. Other linkage criteria include: