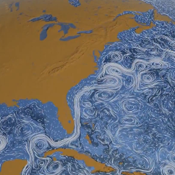 The ocean component of the CESM1.1 is the Parallel Ocean Program version 2 (POP2). This model is based on the POP version 2.1 of the Los Alamos National Laboratory; however, it includes many physical and software developments incorporated by the members of the Ocean Model Working Group.

The POP model is a descendant of the Bryan-Cox-Semtner class of models (Semtner, 1986). In the early 1990’s it was written for the Connection Machine by Rick Smith, John Dukowicz and Bob Malone (Smith et al., 1992). An implicit free surface formulation and other numerical improvements were added by Dukowicz and Smith (1994). Later, the capability for general orthogonal coordinates for the horizontal mesh was implemented (Smith et al., 1995).

Since then many new features and physics packages have been added by various people, including the authors of this document. In addition, the software infrastructure has continued to evolve to run on all high performance architectures. In 2001, POP was officially adopted as the ocean component of the CCSM based at NCAR. Substantial effort at both LANL and NCAR has gone into adding various features to meet the needs of the CCSM coupled model. This manual includes descriptions of several of the features and options used in the POP 2.0.1 release (Jan 2004), the ocean model configuration of the Spring 2002 release of CCSM2, the Spring 2004 release of CCSM3, and the 2010 release of CCSM4.