The discussion that follows is divided into three parts. The first part describes a radiative transfer model which may be used to calculate the spectral reflectance of vegetated surfaces. Next, mathematical representations of the photosynthetic and transpiration rates of individual leaves as functions of environmental variables are briefly reviewed. Simplified versions of two of these formulae are then integrated in order to calculate values of the photosynthetic rate and the surface resistance of whole canopies. Lastly, the integrals of photosynthesis and canopy resistance are compared with equivalent simple ratio and vegetation index values.

For the purpose of this preliminary study, We shall use a simple but reasonably realistic analytical approach.  Dickinson (J983) reviewed the work of Meador and Weaver (J 980) in which the application of the two-stream approximation method to the description of radiative transfer in atmospheres was summarized.

In equations (1) and (2) the individual leaves are treated as isotropic scattering elements. In nature, however, leafreflectivity commonly increasesas the angle between the incident beam and leaf plane decreases. This effect is probably only significant within a narrow range of glancing angles and will be ignored here.

The following assumptions are made throughout the analysis:

(1) The leaves are randomly arranged in space.

(2) When a mixture of green and dead leaves is specified, they are evenly

distributed throughout the canopy.

(3) When a cover fraction is specified, all the vegetation is randomly distributed

inside that fraction, the remaining area being completely bare. It is assumed that the length scale of such bare areas is large in relation to the size of individual plants. The total albedo of such an area isthen taken as the weighted sum of the albedos of the vegetated and bare areas. 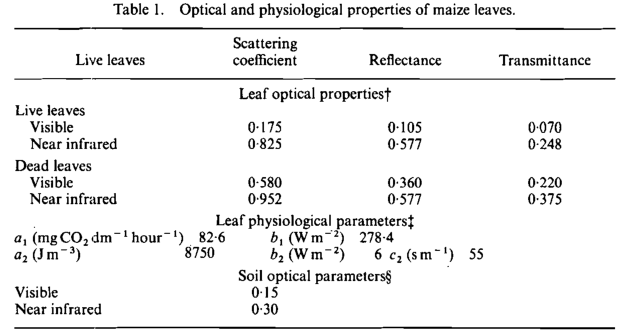 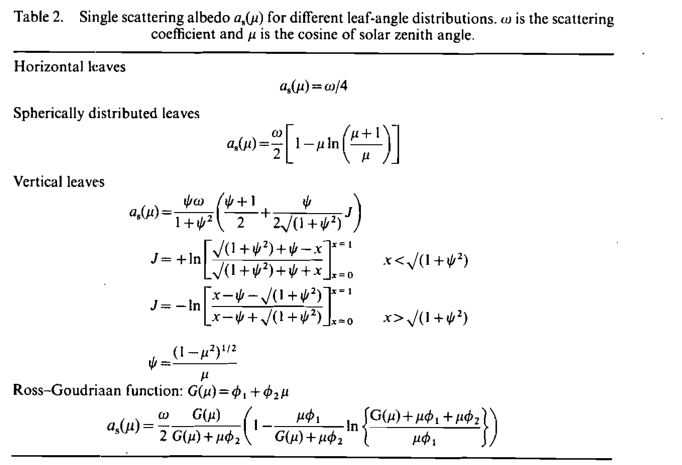 Figure I shows calculated global albedo values for a young wheat crop on a clear day in F.R. Germany compared with two days of data obtained from Vander Ploeg et al. (1980). For this trial, the data of Dickinson (1983) and Goudriaan (1977) were used to specify the values of the leaf transmittances and reflectances for the visible (0·7/lm) and near-infrared (>0'7/lm) wavelength intervals (see table I). 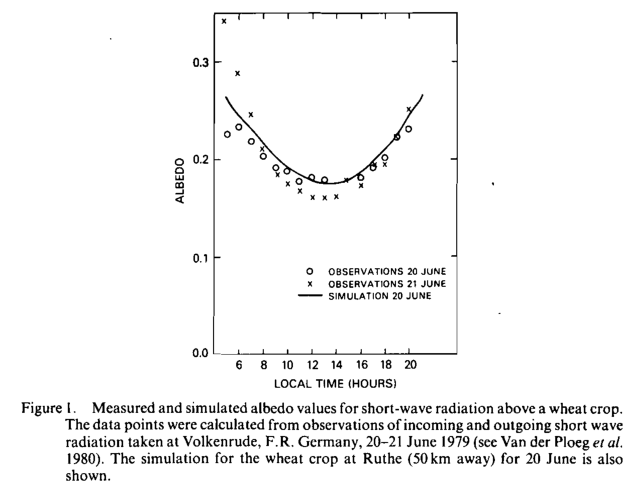 There have been few experimental studies where leaf and canopy photosynthesis were measured simultaneously. Figure 10shows the net photosynthetic response of an individual wheat leafas observed by Evans and Dunstone (1970) with some individual data points for net photosynthesis from Denmead (1976)for comparison. Using values or at and b l fitted to the data of Evans and Dunstone (1970), P; was calculated for whole wheat canopies with leaf-area indices of 1·6and 3·2for clear days in January, i.e. the Australian summer, via equation (21). We have assumed that R d is a constant fraction of gross photosynthesis in this instance which may produce errors at low irradiances. The PAR was assumed to be half of the incident global radiation in both cases.

These calculations are plotted against the corresponding data in figure 10. Two features are immediately apparent, first, additional increments of leaf-area index are predicted to yielddiminishing returns in terms of the total net photosynthetic rate and, secondly, the response of a whole canopy is more linear than that of an individual leaf held normal to the same flux.The first effectisdue to the shadingofleaves at the base of the canopy. The cause of the second effect is to be found in the way the incident flux is partitioned in the canopy; spherically distributed leaves will maintain the same distribution of leaf inclinations relative to the incoming beam regardless of the solar elevation, but the path length willdecrease from a maximum at low solar elevations to a minimum for an overhead Sun. The combination of these two phenomena-shading and the interaction of leaf inclination and solar elevation-tends to linearize the response of P; to global radiation.

In conclusion, it would appear that multispectral data may be of some use in assessing the area-averaged biophysical activity of vegetation in a region as represented by the photosynthetic capacity,P~,and the canopy resistance function, r ~ . The assumed close relationship between these two quantities is supported by figure 22 where it appears that the functional relationship between leaf photosynthesis and transpiration rates translates to the analogouscanopy terms for the maize data set used in this study. The problems posed by uncertainties in the cover fraction, leaf orientation, fraction of dead leaves and species mix (not addressed here) are considerable and it is clear from the results in the previous section that for the relationships between Pc, r c and reflectance to be usable, either the vegetative cover must be continuous and green or further data concerning these factors must be available. High-resolution sensors operating in the visible and near-infrared channels may be applied to this problem.