CALPUFF is an advanced non-steady-state meteorological and air quality modeling system developed by scientists at Exponent, Inc. It is maintained by the model developers and distributed by Exponent. The model has been listed by the U.S. Environmental Protection Agency (EPA) as an alternative model for assessing long range transport of pollutants and their impacts on Federal Class I areas and for certain near-field applications involving complex meteorological conditions when the selection and use occur in agreement with the appropriate reviewing authority and approval by the EPA Regional Office.

The modeling system consists of three main components and a set of preprocessing and post-processing programs. The main components of the modeling system are CALMET (a diagnostic three-dimensional meteorological model), CALPUFF (an air quality dispersion model), and CALPOST (a post-processing package). In addition to these components, there are numerous other processors that may be used to prepare geophysical (land use and terrain) data in many standard formats; meteorological data (surface, upper air, precipitation, and buoy data); and interfaces to other models such as the Penn State/NCAR Mesoscale Model (MM5), the National Centers for Environmental Prediction (NCEP) Eta/NAM and RUC models, the Weather Research and Forecasting (WRF) model and the RAMS model.

Some examples of applications for which CALPUFF may be suitable include:

The CALMET and CALPUFF models have been substantially revised and enhanced as part of work forIWAQM, U.S. EPA, the U.S.D.A. Forest Service, the Environmental Protection Authority of Victoria(Australia), and private industry in the U.S. and abroad.  The improvements to CALMET includedmodifications to make it more suitable for regional applications such as the use of a spatially variableinitial guess field, an option for using hourly MM4 or MM5 gridded fields as a supplement toobservational data, the ability to compute Lambert conformal map factors, a modified mixing heightscheme, an option to use similarity theory to vertically extrapolate surface wind observations, anenhanced algorithm to compute the three-dimensional temperature fields over water bodies, improvedinitialization techniques, a refined slope flow parameterization, and an optional PC-based Graphical UserInterface (GUI) to facilitate model setup and execution and to provide access to on-line Help files. Improvements to CALPUFF include new modules to treat buoyant rise and dispersion from area sources(such as forest fires), buoyant line sources, volume sources, an improved treatment of complex terrain,additional model switches to facilitate its use in regulatory applications, enhanced treatment of windshear through puff splitting, use of a probability density function (pdf) to describe dispersion duringconvective conditions, and an optional GUI.  CALPUFF has been coupled to the Emissions Production Model (EPM) developed by the Forest Service through an interface processor.  EPM provides time-dependent emissions and heat release data for use in modeling controlled burns and wildfires.

Overview of the CALPUFF  Modeling System

The CALPUFF Modeling System includes three main components: CALMET, CALPUFF, andCALPOST and a large set of preprocessing programs designed to interface the model to standard,routinely-available meteorological and geophysical datasets.   In the simplest terms, CALMET is ameteorological model that develops hourly wind and temperature fields on a three-dimensional griddedmodeling domain.  Associated two-dimensional fields such as mixing height, surface characteristics, anddispersion properties are also included in the file produced by CALMET.  CALPUFF is a transport anddispersion model that advects “puffs” of material emitted from modeled sources, simulating dispersionand transformation processes along the way.  In doing so it typically uses the fields generated byCALMET, or as an option, it may use simpler non-gridded meteorological data much like existing plumemodels.  Temporal and spatial variations in the meteorological fields selected are explicitly incorporatedin the resulting distribution of puffs throughout a simulation period.  The primary output files fromCALPUFF contain either hourly concentrations or hourly deposition fluxes evaluated at selected receptorlocations.  CALPOST is used to process these files, producing tabulations that summarize the results ofthe simulation, identifying the highest and second highest 3-hour average concentrations at each receptor,for example.  When performing visibility-related modeling, CALPOST uses concentrations fromCALPUFF to compute extinction coefficients and related measures of visibility, reporting these forselected averaging times and locations. 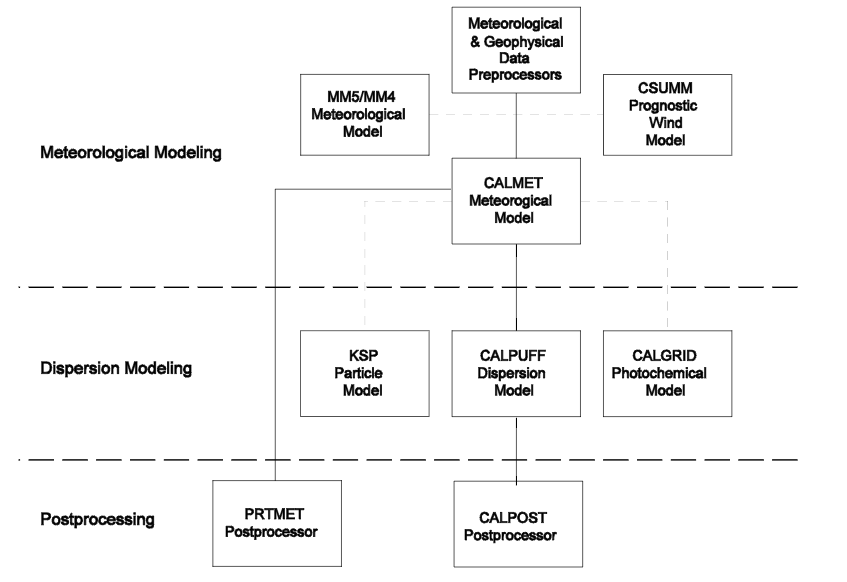 Overview of the program elements in the CALMET/CALPUFF modeling system.