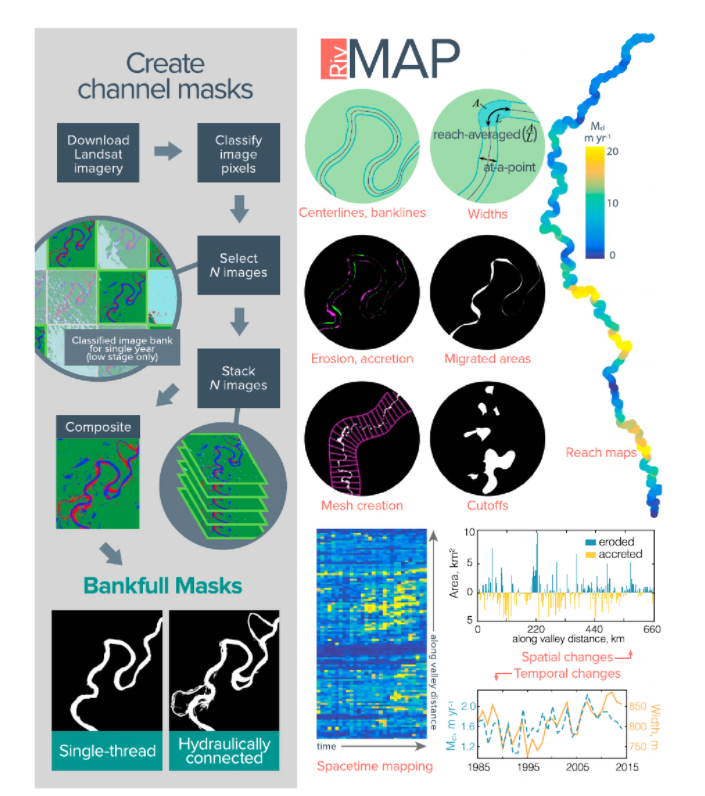 RivMAP provides tools for quantifying static planform geometries from binary channel masks including centerline and bankline extractions, widths, lengths, angles, and curvatures. It also provides functions to measure changes in time, including centerline and bankline migrated areas, areas of erosion and accretion, and cutoff identification, and creates reference grids for mapping these changes. No graphical user interface (GUI) is currently offered, but functions are written intuitively and well commented for ease of customization and appli- cation to specific research questions. RivMAP relies primarily on MATLAB’s built-in image-processing morphological operations, such as erosion, dilation, hole-filling, skeletonization, and distance transforms, to efficiently compute relevant outputs from channel masks. While most of the tools included in RivMAP may be also found in other packages, some of its tools offer innovative solutions to image-based processing problems. The construction of a grid for space-time mapping (section 4.5) a novel method for mapping high temporal resolution planform changes. RivMAP also contains a function to stitch together georeferenced imagery so that results may be recombined for postprocessing. The following sections describe the technical details of RivMAP functions. A link to download RivMAP and a demo with data from the R6 subregion of the Ucayali River are provided in the acknowledgements.

The RivMAP tool for obtaining a centerline from an image mask (centerline_from_mask) requires only two inputs: a channel mask and a two-character variable (exit_sides) that denotes the sides which the channel enters (upstream) and leaves (downstream) the image. (RivMAP does not currently support cases where the river enters and leaves the image on the same side.) First, holes in the input mask are filled, and any areas of the mask not connected to the main channel are removed. The mask is then skeletonized by evenly eroding its boundaries without breaking its connectivity [Lam et al., 1992;Pavelsky and Smith, 2008;Kieler et al., 2009; Fisher et al., 2013]. Skeletonization resolves the centerline well but poses two problems. First, the skeleton at the ends of the channel mask no longer traces the centerline, as it must intersect the corners of the object (channel mask) being skeletonized (Figure 6d). This is overcome by padding the channel mask image with mirrored versions of itself, providing a channel with smooth transitions beyond the boundaries of original mask. The centerline is obtained from the padded image and then cropped to remove the boundary effect of skeletonization. The second problem of skeletonization is the presence of unwanted spurs that must be removed (Figure 6d). Rather than removing spurs individually [e.g.,Fisher et al., 2013], the centerline is found as the shortest path along the skeleton between its endpoints. The coordinates of the shortest path are arranged from upstream to downstream and returned as a two-column vector. The centerline is resolved at single-pixel resolution, so centerline node spacing depends on the resolution of the input mask. Centerlines may be computed for both single-threaded and multithreaded channels, but for the latter the centerline of the holes-filled channel mask will be returned.

Banklines are extracted from a binary channel mask by taking advantage of MATLAB’s e fficient image processing tools. The banklines_from_maskfunction requires inputs of a channel mask and its exit sides; if the input mask contains a multithreaded channel, only the outermost banklines will be returned. The mask image is first cropped such that the ends of the river intersect the edge of the image, and any holes within the mask that border the image boundary are filled (Figures 6f and 6g). The perimeter of this image is found and separated into left and right banks by removing all pixels at the image boundaries except the bankline pixels (two for each exit side). Bankline coordinates are evaluated to determine the left and right banks (looking down- stream) and arranged in an upstream-to-downstream order.

Quoted from: High spatiotemporal resolution of river planform dynamics from Landsat: The RivMAP toolbox and results from the Ucayali River