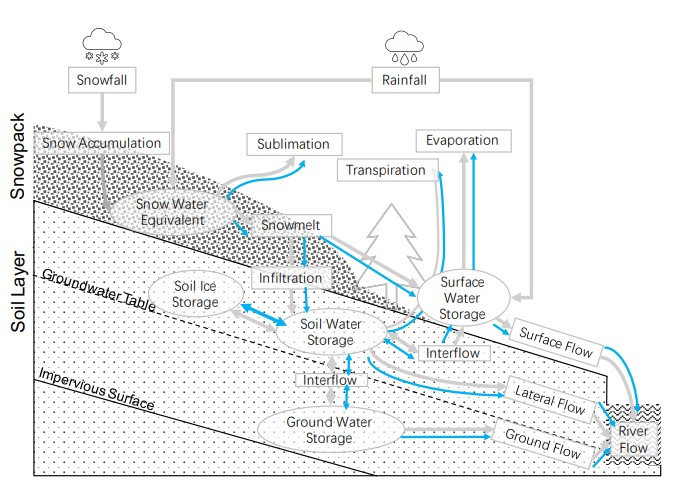 Based on GBEHM, a snow module with physical processes is coupled

A physically based snow module is developed to simulate the snow accumulation, melt and runoﬀ generation processes. This module is coupled with a distributed geomorphology- based eco-hydrological model (GBEHM) In the GBEHM, the basin is divided into diﬀerent sub-basins that contain discrete ﬂow intervals. Each ﬂow interval is connected by several topographically similar ’hillslope-valley’ grids. Each grid has diﬀerent land types, such as vegetation, snowpack, glacier, soil and aquifer. The runoﬀ from each grid includes surface ﬂow, lateral ﬂow and ground ﬂow. In the GBEHM, the grid runoﬀ is ﬁrst transferred into the ﬂow interval and then into the river channel from diﬀerent pathways. The most important improvement of our module is that the snowmelt paths are separately traced in each calculation step, which make the evaluation of snowmelt contribution more reasonable. Another improvement is that the physically based snowmelt module is coupled with a geomorphology-based hy-drological model, which extends the simulation capacity of snowmelt at basin-scale hy-drological processes. In terms of the snow module at vertical dimension, the physical schemes including heat and water balance are similar with SNTHERM model[Jordan,1991], SNOWPACK model[BarteltandLehning, 2002] and CROCUS model[Vionnetetal., 2012]. 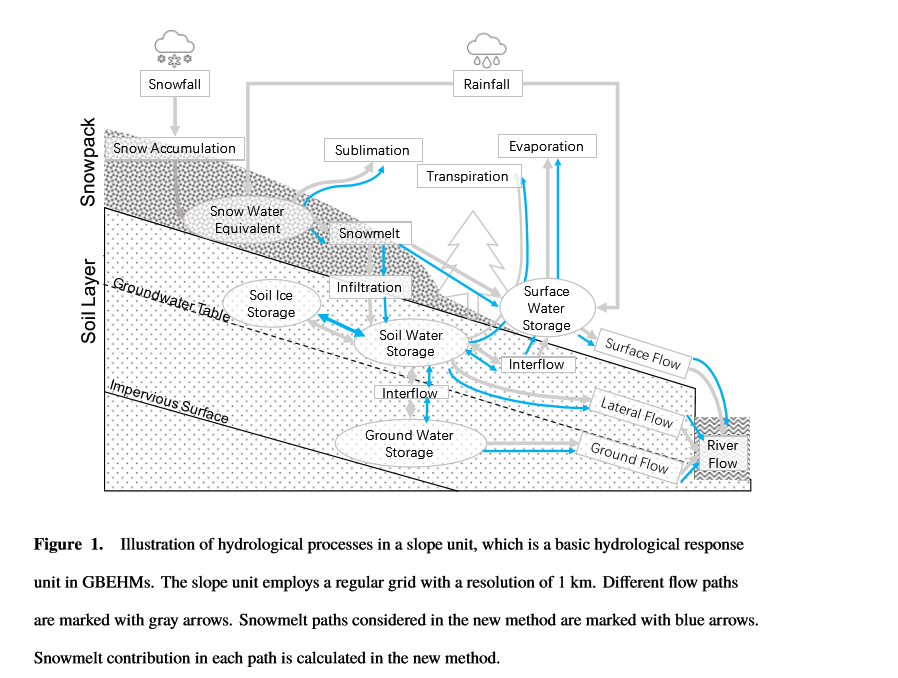 In the original GBEHM model, it is diﬃcult to distinguish the snowmelt compo- nent from total water component, because liquid water from diﬀerent sources is mixed and transferred in simulating these hydrological processes. Here, we introduce a detailed separation method to determine the snowmelt contribution and pathway in the runoﬀ gen- eration processes (Figure 1). The proportion of snowmelt water in soil layers, aquifers and diﬀerent types of ﬂow are updated after the calculation of soil moisture movement and evapotranspiration. In the new separation method, the snowmelt water proportions in snowpack, in each soil layers and in each aquifer are iteratively calculated, and the contri- bution of snowmelt to total discharge is calculated.