WRF is a state-of-the-art atmospheric modeling system designed for both meteorological research and numerical weather prediction.

The Advanced Research WRF (ARW) modeling system has been in development for the past eighteen years. The current release is Version 4, available since June 2018. The ARW is designed to be a flexible, state-of-the-art atmospheric simulation system that is portable and efficient on available parallel computing platforms. The ARW is suitable for use in a broad range of applications across scales ranging from meters to thousands of kilometers, including:

The following figure shows the flowchart for the WRF Modeling System Version 4. 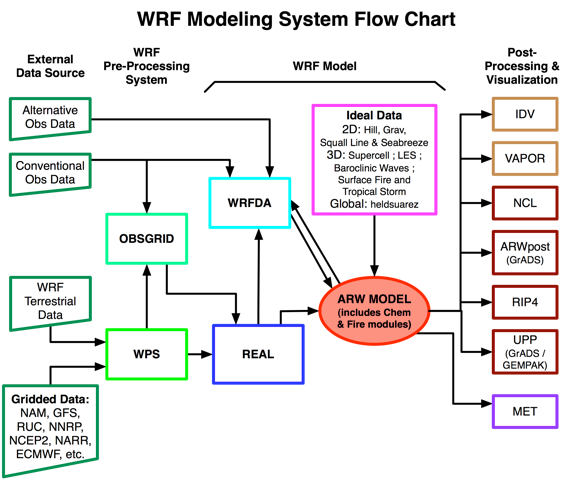 As shown in the diagram, the WRF Modeling System consists of these major programs:

·      GRIB 1/2 meteorological data from various centers around the world

·      User-interfaces to input other static data as well as meteorological data.

This program is optional, but can be used to ingest observations into the interpolated analyses created by WPS. It can also be used to update WRF model's initial conditions when the WRF model is run in cycling mode. Its main features are as follows:

·      It is based on an incremental variational data assimilation technique, and has both 3D-Var and 4D-Var capabilities

·      Analysis is performed on an un-staggered Arakawa A-grid

·      Conventional observation data input may be supplied either in ASCII format via the “obsproc” utility or “PREPBUFR” format.

·      Horizontal component of the background (first guess) error is represented via a recursive filter (for regional) or power spectrum (for global). The vertical component is applied through projections on climatologically generated averaged eigenvectors and its corresponding Eigen values

·      Horizontal and vertical background errors are non-separable. Each eigenvector has its own horizontal climatologically-determined length scale

This is the key component of the modeling system, which is composed of several initialization programs for idealized, and real-data simulations, and the numerical integration program. The key features of the WRF model include:

·       Vertical grid-spacing can vary with height

·       Map-scale factors for these projections:

o   Latitude and longitude, which can be rotated

Several programs are supported, including RIP4 (based on NCAR Graphics), NCAR Graphics Command Language (NCL), and conversion programs for other readily available graphics packages like GrADS.

Program VAPOR, Visualization and Analysis Platform for Ocean, Atmosphere, and Solar Researchers (http://www.vapor.ucar.edu/), is a 3-dimensional data visualization tool, and it is developed and supported by the VAPOR team at NCAR (vapor@ucar.edu).

The details of these programs (with the exception of the MET program) are described more in the later chapters of this user's guide.  See the above link for information about MET.