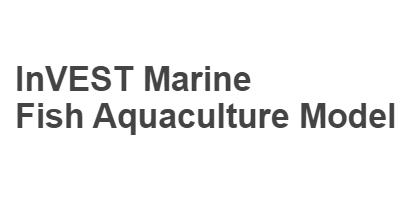 Supporting the production of aquacultured fish and shellfish is an important service provided by coastal and marine environments. Because salmon is one of the two most important finfish in aquaculture worldwide, the current version of the InVEST aquaculture model analyzes the volume and economic value of Atlantic salmon (Salmo salar) grown in netpen aquaculture facilities based on farming practices, water temperature, and economic factors. Inputs for the present model include farm location, management practices at the facilities, water temperature, economic data for valuation, and the time period over which results are of interest. This model is best used to evaluate how human activities (e.g., the addition or removal of farms or changes in harvest management practices) and climate change (e.g., change in sea surface temperature) may affect the production and economic value of aquacultured Atlantic salmon. Limitations of the model include assumptions that harvest practices, prices, and costs of production of aquacultured fish are constant for the selected time period. Additionally, risk of disease outbreaks and variability between individual salmon within a farm are not included in the model.

Human demand for protein from the ocean has rapidly increased and is projected to continue to do so in coming decades (Delgado et al. 2003, Halwart et al. 2007, Soto et al. 2008). In recent years, the scales, previously tilted towards provisioning of protein from capture fisheries, have shifted toward aquaculture (Griffin et al., 2015). In particular, finfish aquaculture, primarily for Atlantic salmon, has intensified in coastal areas over the past two decades (FAO 2004, Goldburg and Naylor 2004, Naylor and Burke 2005). In 2002, farmed salmon production, over 90% of which was for Atlantic salmon, was 68% higher than the volume of wild capture (FAO 2004). Atlantic salmon farming, conducted in floating netpens in low energy, nearshore areas, is a well-established, consolidated industry that operates in the temperate waters of Norway, Chile, the United Kingdom and Canada.

Commercial operations for Atlantic salmon use the marine environment to produce a valuable commodity, which generates revenue and is a source of employment. Yet salmon farming is controversial due to potentially adverse impacts to marine ecosystems and, thereby, people who derive their livelihoods from those ecosystems (e.g., commercial fishermen, tourism operators). Concerns about the effects of Atlantic salmon aquaculture on the marine ecosystem involve debate about the impacts of emission of dissolved and solid wastes to water quality and living habitats, degradation of water quality due to use of antibiotics, mixing and competition of escaped farmed salmon with endemic species (e.g., Pacific salmon), increased risk of parasitism and disease, and depletion of forage fish resources harvested from other ecosystems for use as Atlantic salmon feed.

Regulations for the Atlantic salmon aquaculture industry vary regionally, from the most stringent requirements for locating and operating facilities in Norwegian waters, to fewer constraints for farms in Chilean waters. For all operations, there are regulatory limits on where and how aquaculture can be conducted and requirements for monitoring and regulating the amount of waste generated at different facilities, and in some cases, mitigation requirements.

Weighing the economic benefits of Atlantic salmon aquaculture against the environmental costs involves quantifying both. The InVEST model presented here does the former by quantifying the volume and economic value of the commodity.

The model is designed to address how the production and economic value of farmed Atlantic salmon at individual aquaculture facilities and across a user-defined study area change depending on farm operations and changes in water temperature. Temporal shifts in price, costs or harvest management practices are not dynamically modeled, but can be represented by running the model sequentially, where each run uses different information on prices, costs and farm operations. The risk of disease outbreaks and variability between individual salmon within a farm are not included in the model. The model will yield the most accurate outputs when parameterized with site-specific temperature and farm operations data. If site-specific data are unavailable, the provided ranges of default values can be used to yield first approximations of results (see Data Needs section).

The model is run simultaneously for all Atlantic salmon farms identified by the user. Each farm can have a user-defined set of operations and management practices. The volume of fish produced on a farm depends on water temperature (which affects growth), the number of fish on the farm, the target harvest weight range, and the mortality rate. Fish growth is modeled on a daily time-step until the fish reach the target harvest weight range, after which they are harvested. After a user-defined fallowing period, the farm is restocked and this initiates the next production cycle. Production cycles continue for each farm until the end of the time period of interest (e.g., 2 years, 10 years). Outputs include the harvested weight of fish and net revenue per cycle for each individual farm. In addition, the model yields a map of the total harvested weight, total net revenue, and net present value over the time period of interest.