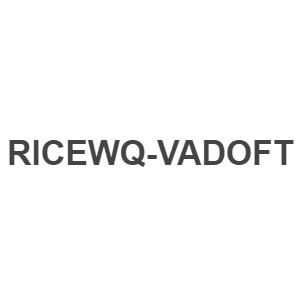 Assessments were made to evaluate the dissipation, leaching, and runoff of agro‐chemicals in aquatic systems. These assessments were conducted using an integrated model that linked two fate and transport models, RICEWQ version 1.6.2 and VADOFT.

RICEWQ simulates water and chemical mass balance associated with the unique flooding conditions, overflows, and controlled water releases that are typical in a rice cropping system (Williams et al., 1999). The model applies the principle of mass balance to simulate water volume changes in the paddy and chemical residues in three media of the rice paddy (rice foliage, water column, and benthic sediments) from the point of chemical application:

(1)
where ∂C (mg kg−1) is the change in concentration over time ∂t (s); ∑Minflux (10−6 kg) and ∑Moutflux (10−6 kg) are cumulative influx and outflow of chemical mass from the control volume; V (m3) (i.e., the rice paddy), and ∑Mreact (10−6 kg) is mass transformation from all processes.
The pesticide mass‐balance equations in water, sediment, and foliage subecosystems are listed as follows:

(4)
where ∂MW (mg), ∂MS (mg), and ∂MF (mg) are the change in chemical mass in water, sediment, and foliage, respectively, over time (∂t) (s); MWapp (mg) is the mass of the applied pesticide not lost to drift and arriving at the water surface; MFapp (mg) is the mass of the applied pesticide intercepted by foliage; Mwash(mg) is the mass washed off from foliage; MW deg (mg), MS deg (mg), and MF deg (mg) are the masses of pesticide degraded in water, sediment, and foliage, respectively; MWtran (mg), MStran(mg), and MFtran (mg) are the masses of metabolite formed by transformation of parent compound in water, sediment, and foliage, respectively; Mvolat(mg) is the mass volatilized across the air‐water interface; Mout (mg) is the mass lost in overflow or drainage; Mseep (mg) is the mass lost in seepage; Mbed (mg) is the mass transfer to bed sediment by direct partitioning; Msetl (mg) is the mass transfer to sediment by particulate settling; Mresus (mg) is resuspended mass; Mdifus (mg) is the mass diffusion between the water and sediment; and Mharv (mg) is the mass of pesticide removed after harvest (this mass may be removed from the ecosystem, left alone and available for wash off, or be applied to bed sediment).
VADOFT performs one‐phase one‐dimensional transient or steady‐state simulations of downward water flow and chemical solute transport in variably saturated porous media (Carsel et al., 1998). The code employs the Galerkin finite‐element technique to approximate the governing equations for water flow and chemical transport with spatial discretization (expressed as nodal points [NPs]) performed using linear elements. It allows for a wide range of nonlinear flow conditions, and handles various transport processes, including hydrodynamic dispersion, advection, linear equilibrium sorption, and first‐order decay. The VADOFT code solves the Richards' equation, the governing equation for infiltration of water in the vadose zone:

(5)
Where Ψ is the pressure head (m), K is the saturated hydraulic conductivity (m s−1), krw is the relative permeability (dimensionless), z is the vertical coordinate (m), t is time (s), and η is an effective water storage capacity (m−3) defined as:

(6)
where Ss is specific storage (m−3), Sw is water saturation (dimensionless), and Φ is the effective porosity (dimensionless).
The governing equation for one‐dimensional transport of a nonconservative chemical solute species in a variably saturated soil takes the form:

(7)
where D is the apparent dispersion coefficient (m2 s−1), c is the solute concentration (μg L−1), θ is the volumetric water content (m3 m−3) (θ = ΦSw), the vertical Darcy velocity (m s−1) R is the retardation coefficient (dimensionless), and λ is the first‐order decay constant (s−1). Note that D is defined as:

(8)
where αL is the longitudinal dispersivity (m); and D* is the effective molecular diffusion coefficient (m2 s−1).
As for water balance, RICEWQ and VADOFT both use a water‐balance model to calculate the water balance in the paddy and soil profile, respectively:

The models were integrated by transferring water and pesticide flux predicted as seepage by RICEWQ as prescribed boundary condition loadings into VADOFT. The top 5 cm of the profile was represented by the active sediment layer in RICEWQ. The remainder of the soil profile was represented as multiple compartments in VADOFT. The bottom of the active sediment layer is the crossed interface between two subsystems represented by RICEWQ and VADOFT. As only one pivot link between the two submodels, the water and chemical seepage out of paddy sediment predicted by RICEWQ becomes the water and chemical input of VADOFT.

RICEWQ is driven by daily weather data and operates at a subdaily time step to obtain the daily decay, seepage, runoff, and leaching amount by integration. When the soil moisture in the paddy exceeds field capacity, seepage to VADOFT occurs. As the paddy dries, soil moisture can decrease down to the wilting point through evapotranspiration. Pesticide residues in seepage water interact with the bed sediment through sorption and degradation.

Herein, the term seepage refers to water and chemical percolating from paddy sediment into the vadose zone (i.e., mass transfer from RICEWQ to VADOFT), and leaching refers to downward movement of water and chemical within the vadose zone or from vadose zone to ground water. For a full description of both models, RICEWQ and VADOFT, the reader is referred to Williams et al. (1999), Carsel et al. (1998), and Capri and Miao (2002)