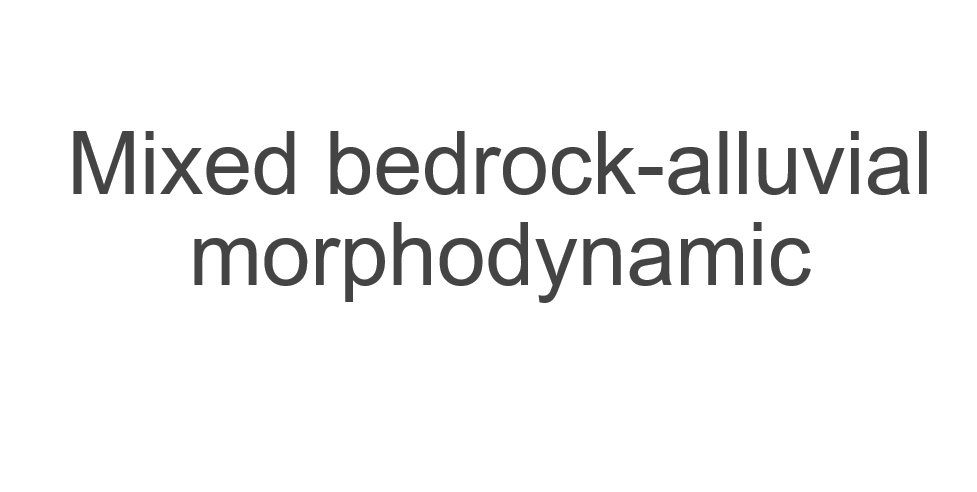 Alluvial morphodynamics of bedrock reaches. The model is developed to simulate the sediment transport and alluvial morphodynamics of bedrock reaches. It is capable of computing the alluvial cover fraction, the alluvial-bedrock transition and flow hydrodynamics over both bedrock and alluvial reaches. This model is now validated against a set of laboratory experiment. Field scale application of the model can also be done using field parameters.

equilibrium conditions, i.e., conditions in which the elevation of the alluvium averaged over a

series of bedforms did not change in time [Anderson et al., 1975].  Due to the limited length of the experimental facility, the experiments considered the case of bedload transport.  In other words, the interaction between the suspended bed material load and the bedrock surface was out of the scope of the present study. The present experiments aimed to investigate how 1) flow resistances and grain size distribution of the bed surface changes with changes in alluvial cover fraction and 2) whether empirical relations used in fully alluvial reaches are able to predict the sediment load in mixed bedrock alluvial reaches.

This paper is organized as follows, we first report background information on onedimensional morphodynamic models of alluvial and bedrock rivers that is relevant to this study. We then describe the laboratory experiments and the relevant results.  The spatial changes in flow resistance, bedload transport rates, grain size distribution of bed surface sediment and bedform geometry are discussed and interpreted using models, procedures and approaches developed to study the morphodynamics of fully alluvial rivers. This exercise shows that methods and procedures developed for fully alluvial rivers can be used to model the alluvial morphodynamics of bedrock systems if the presence of a non-erodible surface is explicitly accounted for in the calculations.