The one-dimensional (vertical) sediment-transport model SEDTRANS96 has been upgraded to predict more accurately both cohesive and non-cohesive sediment transport. Sedtrans05 computes the bed shear stress for a given set of flow and seabed conditions using combined wave-current bottom boundary layer theory. Sediment transport (bedload and total load) is evaluated using one of five methods. The main modifications to the original version of the model are: (1) a reorganization of the code so that the computation routines can be easily accessed from different user interfaces, or may be called from other programs; (2) the addition of the Van Rijn method to the options for non-cohesive sediment transport; (3) the computation of density and viscosity of water from temperature and salinity inputs; and (4) the addition of a new cohesive sediment algorithm. This latter algorithm introduces variations of sediment properties with depth, represents the suspended sediment as a spectrum of settling velocities (i.e. size classes), includes the flocculation process, and models multiple erosion–deposition cycles. The new model matches slightly better the field measurements of non-cohesive sediment transport, than does the predictions by SEDTRANS96. The sand-transport calibration has been extended to high transport rates. The cohesive sediment algorithm reproduced well experimental data from annular flume experiments.

Sedtrans05 is a one-dimensional (vertical profiles) model of sediment transport that simulates either sand or cohesive sediments under either steady currents or under the combined influences of waves and currents. Sedtrans05 uses the Grant and Madsen (1986) continental shelf bottom boundary layer theory to predict the mean bed shear stresses and the combined velocity profile. Five methods to predict sediment transport for non-cohesive sediments are programmed into the newer version. The methods of Einstein–Brown (Brown, 1950), Yalin (1963), and Van Rijn (1993) predict bedload transport. The methods of Enge[1]lund and Hansen (1967) and Bagnold (1963) predict total load transport (bedload plus suspended load). The dimensions and type of bedforms are also predicted. A new algorithm for cohesive sediments determines more accurately bed erosion and deposi[1]tion (see Section 4). Sedtrans05 is composed of several linked ele[1]ments. The calculations are coded in a set of Fortran77 routines that are accessed through the subroutine SEDTRANS05. This subroutine takes as input current and wave conditions and sediment type (Table 1). After calling the appropriate subroutines, the model returns the results as output. The core subroutine SEDTRANS05 can be called in several ways: (1) as an interactive input and batch program—SED05—which runs in a console win[1]dow; (2) as a graphic user interface—Sedtrans05 GUI—written in Visual Basic and running under Microsoft Windows; (3) as a MEX-file function to call the Fortran77 subroutines directly from Ma[1]tlab—sedtrans05m; (4) as a 1D (time series) model for cohesive sediment—SEDI1D—which was used to calibrate the cohesive sediment algorithm (see Section 5.2); and (5) as a subroutine linked to a 3D hydrodynamic model, such as the model SHYFEM, which simulates waves and tidal flows in Venice lagoon (Ferrarin et al., 2004; Umgiesser et al., 2006). Sedtrans05 can be used as 1D model or integrated into a multi-dimensional model. The difference is simply that in the 1D interface the velocities and wave parameters are prescribed as external forcing, supplied by the user, whereas in a 2D/3D model these values are supplied directly by the hydro[1]dynamic model. Likewise, the output of Sedtrans05 is simply written to output files for a 1D interface, whereas, when integrated in a multi-dimensional model, the output is fed back to the hydrodynamic model to change the bathymetry; it therefore provides feedback from the sediment dynamics to the hydrodynamics. 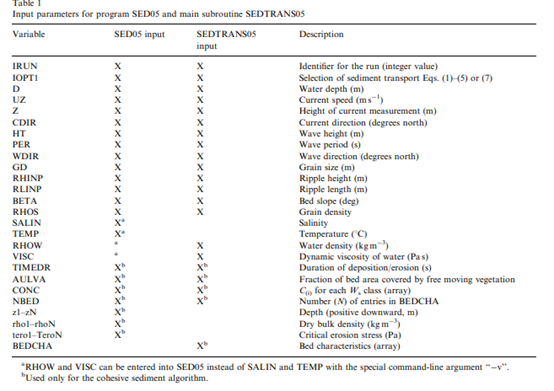 Sedtrans05 is licensed under the GNU General Public Licence. The Fortran77 source code is available from the web site of Computers & Geosciences. In addition, executables of SED05 and SEDI1D compiled for DOS/Windows and for Linux, and the graphic user interface for Windows (Sedtrans05 GUI) are available at http://labsedim. uqar.qc.ca/sedtrans05.

Quoted from: Sedtrans05: An improved sediment-transport model for continental shelves and coastal waters with a new algorithm for cohesive sediments