A simple model for wave-supported gravity flows is applied to sediment deposition off the mouth of the Po River at time scales ranging from a single major flood to steady-state clinoform progradation. Wave-supported gravity flows are a newly appreciated class of turbidity currents, which rely on the velocity shear produced by waves near the seabed to keep sediment in suspension. The modeling approach used here, which limits the gravity flow's sediment load via a critical Richardson number, is applicable to fine sediment transport near river mouths wherever wave energy is available to move abundant sediment offshore during floods. Results suggest this phenomenon can account for the majority of the fall 2000 flood deposit mapped by EuroSTRATAFORM investigators in the vicinity of the Po River prodelta and also for the rate of prodelta progradation observed off the dominant Pila outlet of the Po over a century time-scale. Model results predict that convergence of down-slope sediment transport by wave-supported gravity flows increases with bed slope but decreases with slope gradient, such that greatest deposition occurs near where steep slopes first stop increasing with distance offshore. Thus on profiles which reach maximum steepness near shore, like those off Tolle–Gnocca–Goro mouths today or off the Pila mouth 150 y ago, gravity-driven deposition occurs in shallower water. Over time, if deposition overwhelms subsidence, the prodelta becomes less steep near shore and steeper offshore, and the locus of deposition moves progressively into deeper water. If the prodelta is prograding across a relatively flat shelf, the shape of the prodelta eventually reaches a stable form which progrades seaward as a unit. This has occurred off the Pila; but subsidence has likely overwhelmed deposition off the Tolle–Gnocca–Goro, keeping steepest slopes and maximum deposition in shallower water.

The model domain as applied here consists of a 118 by 92 element rectangular grid covering a region close to the entire area displayed in Fig. 1, with a 240 m spacing in the predominantly across-shore east–west direction and a 330 m spacing in the mainly along-shore north–south direction. The bathymetry for the model is the same bathymetric database used in plotting Fig. 1 (from Correggiari et al., 2001), interpolated onto the above grid, and then smoothed both north and south using a cubic spline on every ninth bathymetric point. Bathymetric smoothing is necessary because frictionally dominated gravity flows will otherwise pool unrealistically behind small irregularities in bathymetry. Because of complex bathymetry to the southwest of the Gnocca mouth, our model domain does not extend quite as far south as the observations of flood deposition in Fig. 2. Model bathymetry is not updated by deposition over the course of the single season simulations. 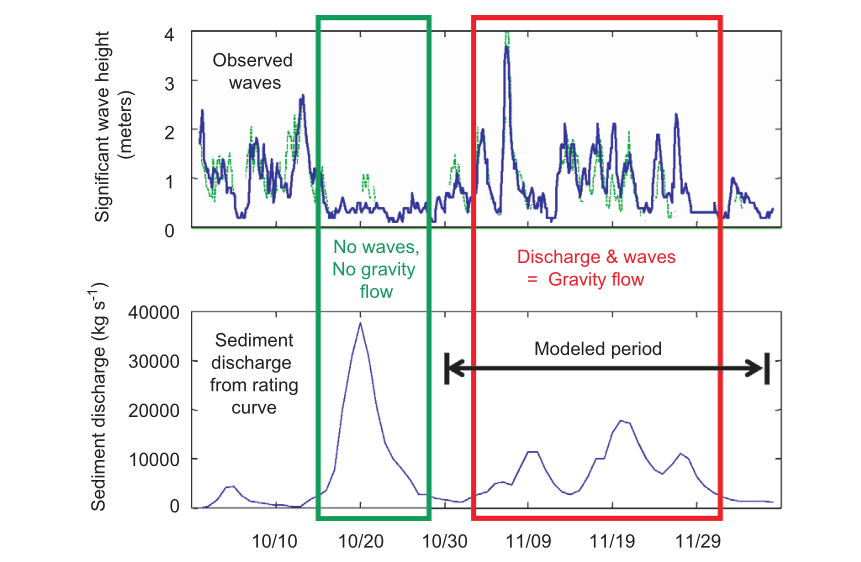