A model that estimates the official emissions inventories of on-road mobile sources in California.

The California Air Resources Board (CARB) developed an EMFAC model to calculate statewide or regional emissions inventories by multiplying emissions rates with vehicle activity data from all motor vehicles, including passenger cars to heavy-duty trucks, operating on highways, freeways, and local roads in California.

Over the years, tougher emissions standards have been met with technological solutions of increasing complexity. As a result, the emissions estimation models have also grown in size and complexity. EMFAC2021 is the latest emissions inventory model that calculates emissions inventories for motor vehicles operating on California roadways. EMFAC2021 represents the next step forward in the ongoing improvement process for EMFAC, and reflects the CARB’s current understanding of how vehicles travel and how much they pollute. The EMFAC2021 model is needed to support CARB’s regulatory and air quality planning efforts and to meet the Federal Highway Administration’s transportation planning requirements.

The EMFAC2021 model can be used to show how California motor vehicle emissions have changed over time and are projected to change in the future. This information helps CARB evaluate prospective control programs and determine the most effective, science-based proposals for protecting the environment. EMFAC2021 includes the latest data on California’s car and truck fleets and travel activity. New forecasting methods have been incorporated for developing vehicle age distributions and estimating vehicle miles traveled. The model also reflects the emissions impact of Federal and California recent rulemakings.

Starting from EMFAC2014, CARB staff gradually departed from using Fortran to Python and MySQL. EMFAC2014 and EMFAC2017 had a legacy Fortran module for certain emission processes. EMFAC2021 is developed completely in Python and MySQL database. While EMFAC development migrates to Python and MySQL, staff with the goal to maximize the following aspects, including user friendliness, transparency, ease of maintenance, flexibility for incorporating and supporting future regulations, improved computational efficiency, and convenience to transfer of EMFAC outputs to other services.

One major architectural change of EMFAC2021 is the ability to run the model in parallel on multiple CPU cores. Although the number of computations required for model runs has increased substantially due to many new features and updates in EMFAC2021, this parallelization allows EMFAC2021 to run significantly faster than its predecessors when deployed on high performance computing clusters. EMFAC2021 runs for multiple combinations of sub-areas and calendar years simultaneously up to a level supported by user’s computer. Since EMFAC performs most computations on its MySQL server, it is recommended to run EMFAC's MySQL server with multiple CPU cores and a highperformance storage system. Figure 2.2-1 displays a flow chart indicating the GUI selections necessary to generate the various outputs of EMFAC2021. 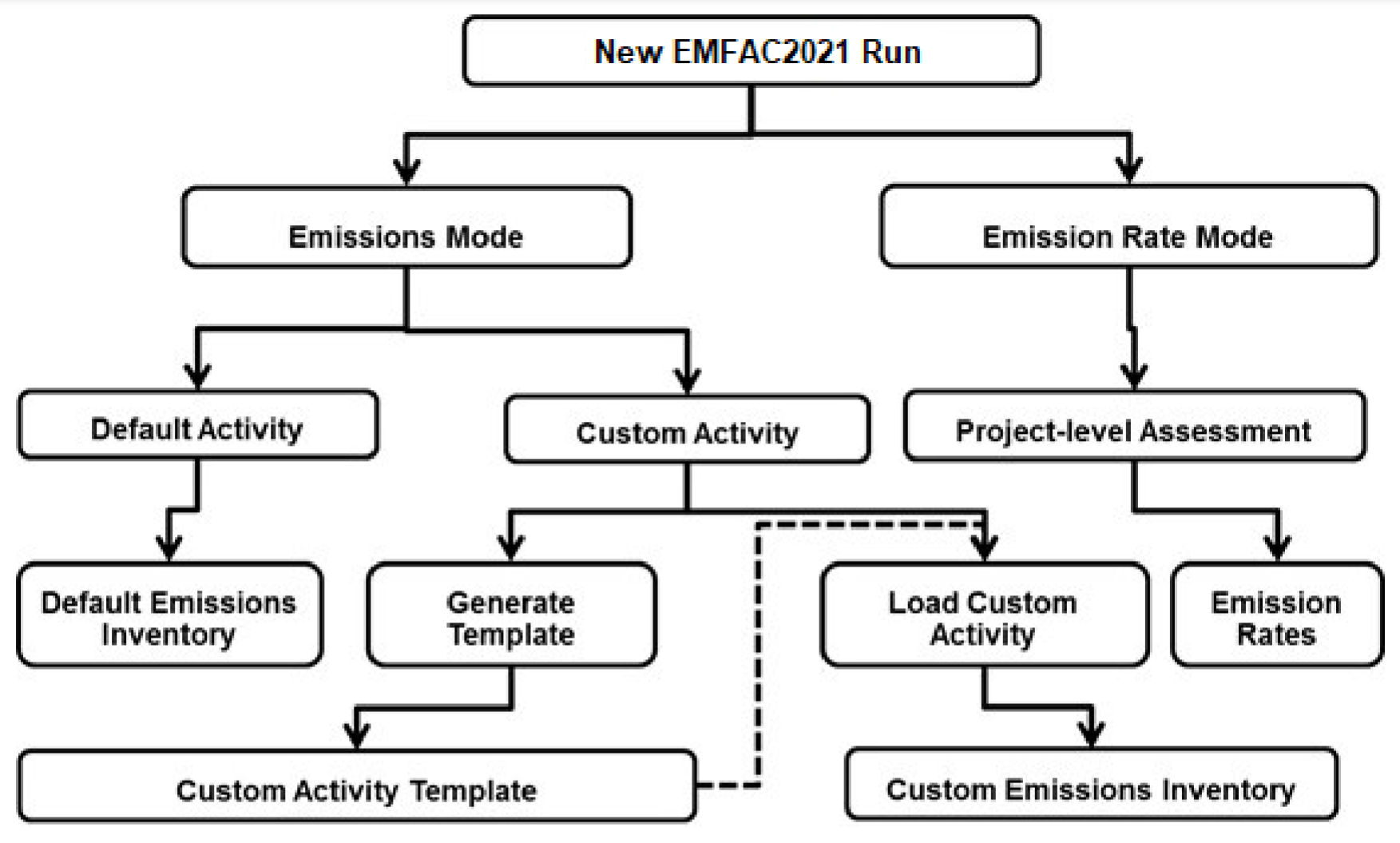