Global population has become increasingly urbanized: to date 52% of the world’s population live in cities, and this proportion is projected to increase to 67% by 2050. Urbanization modifies surface energy and water budgets, and has significant impacts on local and regional hydroclimate. In recent decades, a number of urban canopy models (UCM) have been developed and implemented into the WRF model to capture urban land-surface processes, but those UCMs were coupled to the simple Noah LSM. We recently couple the more advanced Noah-MP LSM to WRF-Urban as well as to the urbanized high-resolution land data assimilation system (u-HRLDAS). This new modeling capability was tested over Phoenix and Beijing metro areas and will be released in WRF in 2017.

We also applied WRF-Urban to assess the degree to which a detailed urban modeling approach can improve real-time weather prediction for cities (Barlage et al. 2016). The 1 km Institute of Urban Meteorology (IUM) operational model has a high-temperature bias, especially at night, and a high wind speed bias in urbanized areas, limiting the ability of IUM to provide accurate, high-resolution prediction of thermal stress and air quality for the densely populated Beijing-Tianjin metro region. WRF-Urban hindcast results showed that non-turbulent kinetic energy (TKE) planetary boundary layers (PBL) schemes perform better than their counterpart TKE-based schemes at night, reducing the warm bias by about 1°C in nonurban areas. However, the best performing urban PBL scheme still produced ~2°C warm bias. Considering aerosol effects in the solar radiation scheme improves downward solar radiation and surface energy budgets but has negligible effect on the simulated temperature. UCMs and the specification of various urban model parameters have comparable or even more significant contributions to forecast biases in temperature and wind speed than PBL schemes. The predicted PBL height using an optimized urban parameter table is lower by about 100–200 m, which is about 50–100% of the interurban scheme effect on the PBL height. Overall, the Building Effect Parameterization urban scheme with the default parameter table, or a parameter table with less urban heat storage, is recommended for the best results in urban areas and shows that most of the urban areas of Beijing and Tianjin have a greater than 4°C improvement in absolute temperature bias and more than 1 m s−1 improvement in absolute wind speed bias (Fig. 3). 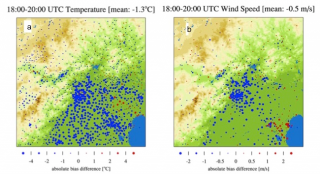