The Continuous API Model consists of 4 quadrants, equations to compute baseflow runoff and a few additional features including an option to account for the effect of frozen ground on runoff.

Antecedent Precipitation Index (API) based procedures have been used for many years by River Forecast Centers (RFCs) for producing flood forecasts (Linsley et al, 1949). The API procedures developed by the RFCs are applied on a storm basis. The API value at the beginning of the storm is typically related to time of the year, storm duration and storm rainfall to compute storm runoff (see Figure 1a). Incremental runoff is computed by subtracting the total storm runoff at the end of a period from that at the beginning. A unit hydrograph is then applied to the incremental runoff values to produce a discharge hydrograph. Since storm or event API procedures only compute surface or storm runoff, baseflow needs to be added to the surface runoff hydrograph to produce the total discharge. For short-term river or flood forecasts (hours or days into the future) satisfactory estimates of baseflow can usually be determined. During floods, errors in baseflow estimates have a minimal impact. During recessions it is relatively easy to make a several day projection of discharge. Many RFCs have continued to use API based rainfall-runoff models because they are simple to understand, easy to update when observed values differ from computed estimates and generally do a good job forecasting floods when properly applied.

In recent years two problems have arisen related to the use of API based rainfall-runoff models by the RFCs.

First, the need for water management forecasts is increasing dramatically. For water management purposes predictions are often needed for weeks or months into the future, plus in many cases low flow values are of interest. Within NWSRFS, the Extended Streamflow Prediction (ESP) System is used to generate such forecasts. For general ESP purposes, a model must be able to accurately simulate all flow levels for extended periods. Event API models cannot do this, thus the RFC is faced with switching to a different type of model or using one model for flood forecasting and another for ESP applications. Neither of these options is appealing to some of the RFCs.

Second, it is very difficult to calibrate event API models in conjunction with other hydrologic models for a watershed. The data used for calibration of an event API model typically includes the API value at the beginning of the event and the storm rainfall, both computed from precipitation data; the date and duration of the storm; and the total surface runoff for the event. Total runoff is computed by separating surface runoff from baseflow using one of the standard techniques for baseflow separation. The calibration is then done by either manually deriving the coaxial graphical relationship between the variables (see Figure 1a) and/or using computer techniques to minimize the error between computed and observed storm runoff. A unit hydrograph to be used in conjunction with an event API model can be derived based on events when all surface runoff is generated in a single time period or when uniform runoff can be assumed for several periods. Unit hydrographs derived from other storms are not directly compatible with the event API model because the distribution of runoff used to derive the unit hydrograph is not the same as would be produced by the API model if it was applied to the same event. For other hydrologic models, such as a snowmelt model, that might be used in conjunction with an API model, the output variables of the model rarely can be isolated by analyzing a hydrograph. Thus, these other models cannot be calibrated for the watershed. Currently when a snow model is used with an event API model by the RFCs, the snow model parameters are based on calibrations done somewhere in the area in conjunction with a conceptual rainfall-runoff model or on point calibrations of the snow model using observed water-equivalent data. The calibration procedures provided within NWSRFS generally cannot be used for an event API model.

Since several RFCs prefer to use an API based rainfall-runoff model for flood forecasting, the Continuous API Model was developed so that an API based model that could be used with the ESP and calibration systems would be available within NWSRFS. The Continuous API Model computes runoff on an incremental, not on a storm, basis and generates both surface and baseflow runoff amounts.

The CONT-API model uses a graphical technique consisting of four quadrants to compute surface runoff, baseflow, and a few additional features including an option to account for the effect of frozen ground on runoff (Figure below). The four quadrants perform the following functions. The first quadrant accounts for the seasonal relationship between API and current soil-moisture conditions. The two curves in this quadrant represent wet and dry conditions of the watershed. A specific watershed condition is determined in three ways: a fixed week number, antecedent evaporation index, or antecedent temperature index. The second quadrant accounts for surface moisture conditions. The third quadrant computes the incremental surface runoff based on surface and overall soil-moisture conditions. The fourth quadrant computes the portion of the precipitation that does not become surface runoff and enters groundwater storage. Baseflow runoff is computed based on the total water in groundwater storage and the amount that has entered the storage in the recent past. The model also allows for impervious area runoff and riparian vegetation losses and frozen ground components. 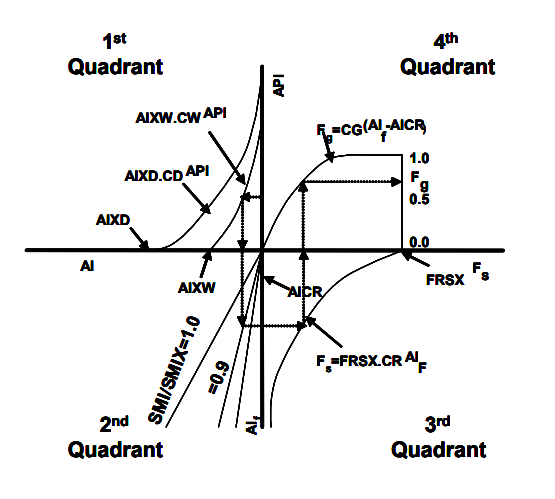