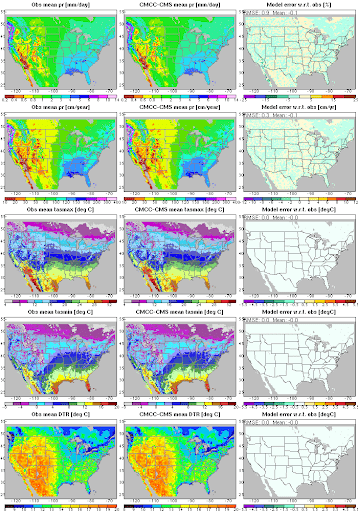 CMCC-CMS data covers the following fields: atmos, land, landIce, ocean and seaIce; there are the following data: day, fx and mon. These operations include overall members: r0i0p0 and r1i1p1. The fifth phase of the WCRP coupling model comparison project (CMIP5) is a global climate model comparison project, coordinated by the PCMDI (Climate Model Diagnosis and Comparison Program) on behalf of the World Climate Research Program (WCRP), and provides advice for intergovernmental projects.

In CMCC-CM, the ocean component is the global ocean model OPA 8.2 (Madec et al. 1998), in its ORCA2 global configuration. The horizontal resolution is 2°x2° with a meridional refinement near the equator, approaching a minimum 0.5° grid spacing. The model has 31 vertical levels, 10 of which lie within the upper 100 m.

ORCA2 also includes the Louvain-La-Neuve (LIM) model for the dynamics and thermodynamics of sea ice (Fichefet and Morales-Maqueda 1999). Ocean physics includes a free-surface parameterization (Roullet and Madec 2000) and the Gent and McWilliams (1990) scheme for isopycnal mixing. For more details about the ocean model and its performance, readers are referred to Madec et al. (1998).

The atmospheric model component is ECHAM5 (Roeckner et al. 2003) with a T159 horizontal resolution, corresponding to a Gaussian grid of about 0.75°x 0.75°. This configuration has 31 hybrid sigma-pressure levels in the vertical and top at 10 hPa. The parameterization of convection is based on the mass flux concept (Tiedtke 1989), modified following Nordeng (1994). Moist processes are treated using a mass conserving algorithm for the transport (Lin and Rood 1996) of the different water species and potential chemical tracers. The transport is resolved on the Gaussian grid. A more detailed description of the ECHAM model performance can be found in Roeckner et al. (2006).