Evolution of a river profile with dynamic width. Optimization Technique in Transient Evolution of Rivers (OTTER). This models a 1D river profile while incorporating a algorithm for dynamic channel width. The channel width algorithm dynamically adjusts channel geometry in response to values of water discharge, rock-uplift/erosion, and sediment supply. It operates by calculating the current shear stress (no wide channel assumption), the shear stress if channel width is slightly larger, and shear stress for a slightly narrower channel. Using these values, erosion potential is calculated for all three scenarios (no change in width, slightly wider, slightly narrower) and the one that generates the maximum erosion rate dictates the direction of channel change. See Yanites, 2018 JGR for further information.

The modeling framework includes rock uplift, which acts to lift the river bed relative to a stable reference frame, and river processes, which include both the sediment transported as bedload and fluvial bedrock erosion (Figure). At each time step, vertical channel evolution (bedrock incision rate and/or change in sediment thickness) and width changes are quantified as described below. The presented model is not a replacement to these more physically based approaches, but rather provides a complementary approach that is useful for incorporating channel width dynamics over long time scales and large spatial scales. Additionally, one of the goals of the model development here is to provide a framework for incorporating dynamic channel width and the impacts of sediment into landscape evolution models.

Elevation (z) along the river profile evolves over time (t) and is modified by the rock-uplift rate (Ur) and either the erosion rate (E) or the change in the sediment thickness (h) if the entire bed of a reach is covered in sediment:

The implementation of this model is schematically illustrated in Figure 2 and is similar to other river profile modeling approaches (Yanites et al., 2013). Over long time scales (e.g.,>103yrs), sediment depth (h) will be greater than zero if sediment supply outpaces capacity. In this case, vertical erosion will cease until this sediment is evacuated. If sediment transport capacity exceeds supply over long time scales, then sediment depth will be effectively zero, although local, temporary patches of sediment can still exist.

All models explored in this study require the calculation of boundary shear stress (τb) for each model node, either for bedrock erosion estimates or for quantifying sediment transport capacity:

Where Ac is the cross sectional are a, P is the wetted perimeter, W is the channel width, and H is the flow depth. Flow depth is calculated using the conservation of mass for water discharge, Qw:

where the mean flow velocity, V, is estimated with Manning’s equation:

Where n is the Manning’s roughness coefficient. For this study, I will assume that the channels are rectangular. Contrary to many studies, I make the wide channel assumption (i. e., W≫H and there fore R=H) only for scenarios in which the width to depth ratio (W/H) is greater than 5. For values of W/H≤5, the wide channel assumption is not used. I note that a W/H threshold of 5 is small given that for a rectangular channel, a W/Hof 18 is required for H to be 90% of R; however, I find that the dynamics of the slope-width coupled modeled outlined below do not change significantly when using the wide channel assumption at W/H>5 compared to model runs in which I raised the cutoff value. When the wide-channel assumption is not made, flow depth is estimated using Matlab’s fsolve function which solves for a series of nonlinear equations (equations (3)–(5) in this case) using a least squares algorithm (Coleman & Li, 1996). When invoked (i.e., for narrow channels), this approach increases computational time. Future work should focus on understanding how cross-channel shape (e.g., nonrectangular channels) evolves in response to changes in sediment (Finnegan et al., 2007; Nelson & Seminara, 2011), base level, lithology, and water discharge. 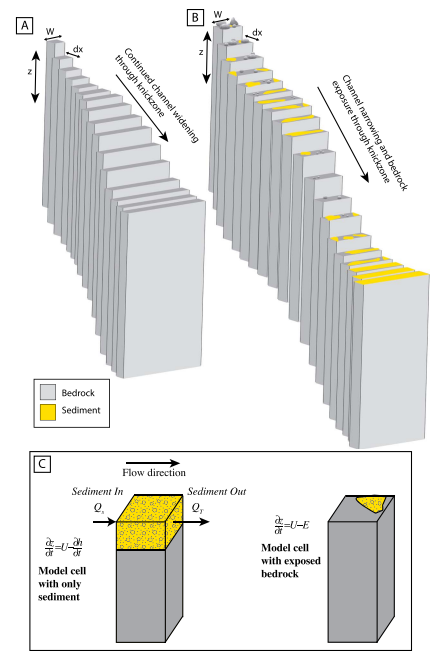