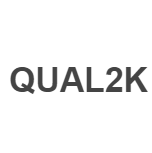 QUAL2K (or Q2K) is a river and stream water quality model.

Surface water quality can be modeled using the US EPA model QUAL2K, version 2.07. QUAL2K, developed by Dr. Steve Chapra and his grad students at Tufts University, provides for much more detailed water quality modeling than WEAP--including diurnal simulations and modeling of nitrogen, phosphorous, sedimentation, algae, pH and pathogens. QUAL2K consists of an Excel workbook (QUAL2K.xls) that provides the front-end to the model and a Fortran executable (Q2KFortran2_04.exe) that runs the calculations. You may use the workbook to create and edit QUAL2K datasets (saved in files with the extension .q2k), run the model, and view the results, in tables and graphs. The full details of QUAL2K and its use are beyond the scope of this document. Refer to the QUAL2K User Guide (Q2KDocv2_04.pdf) for full details of the model and Excel interface.

In order to link QUAL2K to WEAP, you will first need to prepare and calibrate a QUAL2K file outside of WEAP, using the QUAL2K interface (an Excel spreadsheet, provided in the WEAP directory). Because QUAL2K is so detailed, preparation of an initial QUAL2K data file will entail significant effort.

The following description comes from the official QUAL2K page on the US EPA website: http://www.epa.gov/ATHENS/wwqtsc/html/qual2k.html

QUAL2K (or Q2K) is a river and stream water quality model that is intended to represent a modernized version of the QUAL2E (or Q2E) model (Brown and Barnwell 1987). Q2K is similar to Q2E in the following respects:

One dimensional. The channel is well-mixed vertically and laterally.

Software Environment and Interface. Q2K is implemented within the Microsoft Windows environment. It is programmed in the Windows macro language: Visual Basic for Applications (VBA). Excel is used as the graphical user interface.