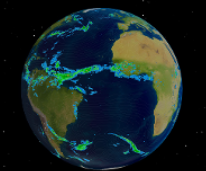 HadCM3 is a coupled climate model that has been used extensively for climate prediction, detection and attribution, and other climate sensitivity studies.

HadCM3 stands for the Hadley Centre Coupled Model version 3. It was developed in 1999 and was the first unified model climate configuration not to require flux adjustments (artificial adjustments applied to climate model simulations to prevent them drifting into unrealistic climate states).

HadCM3 was one of the major models used in the IPCC Third and Fourth Assessments, and also contributes to the Fifth Assessment. Its good simulation of current climate without using flux adjustments was a major advance at the time it was developed and it still ranks highly compared to other models in this respect [Reichler and Kim, 2008]. It also has the capability to capture the time-dependent fingerprint of historical climate change in response to natural and anthropogenic forcings [Stott et al. 2000] which has made it a particularly useful tool in studies concerning the detection and attribution of past climate changes.

HadCM3 is also the climate configuration used in the following projects:

The oceanic component has 20 levels with a horizontal resolution of 1.25 x 1.25 degrees. At this resolution it is possible to represent important details in oceanic current structures.