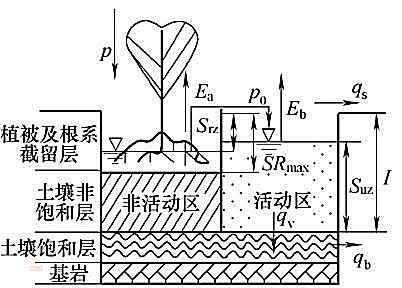 A distributed hydrological model based on DEM grid and terrain.

GTOPMODEL adopts two of the three hypotheses of TOPMODEL: the saturated hydraulic conductivity of soil decreases exponentially with the increase of depth; the groundwater surface is parallel to the ground surface.

GTOPMODEL extracts the drainage network from DEM according to the single flow direction method, establishes the topological relationship between grids, divides the basin into unit confluence zones, and calculates the flow generation grid by grid on this basis; then uses the Muskingum flow algorithm to calculate the flow to the outlet grid by grid, and obtains the flow process. The unit confluence zone is defined as the confluence area composed of grids converging to the same whole channel, as shown in Figure 1 As shown in the figure, the watershed is divided into grids (the watershed extracted from DEM is originally composed of grids). The watershed in the figure has four river sections, so it can be divided into four unit confluence zones.