CASC2D solves the equations of conservation of mass, energy and linear momentum to estimate watershed runoff for a given rainfall input. The overland flow routing formulation is based on an explicit 2-dimensional finite difference (FD) technique.

CASC2D was incorporated as part of the GRASS GIS for hydrologic simulations as r.hydro.CASC2D (Saghafian 1993; Saghafian and Ogden 1996). Later on, Ogden (1994) added the implicit channel routing option to CASC2D. Since 1995, CASC2D has been reformulated with the addition of continuous simulation capabilities and other hydrological components such as interception, initial depths, evapotranspiration and redistribution (Ogden 1997b). This last version is incorporated in the Watershed Modeling System (WMS) Interface developed by Brigham Young University (2001) and is known as CASC2D for WMS.

CASC2D solves the equations of conservation of mass, energy and linear momentum to estimate watershed runoff for a given rainfall input.  The overland flow routing formulation is based on an explicit 2-dimensional finite difference (FD) technique.  An explicit FD technique is used for the routing of 1-dimensional channel flow.

To understand the method by which the CASC2D model conducts its calculations, it is important to conceptualize the two dimensional spatial nature and resolution of the given watershed data.  The explicit numerical solution is achieved by segmenting the entire catchment area into equal square elements, which are then assigned parameters relating to soil infiltration characteristics, roughness coefficients, and soil erosion parameters (Spah 2000).  As each parameter is defined, it is assumed to be uniform throughout the cell area with the actual value assigned to a central nodal point.

Figure 1 provides a visual illustration of how the grid concept within the CASC2D model is defined for a small nine-cell section of a watershed (Julien and Saghafian). 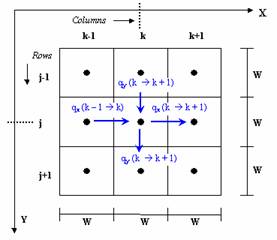 The process by which CASC2D transports runoff through a defined channel network is based on a one-dimensional, diffusive wave approximation scheme. This scheme is mathematically similar to that used for overland flow computations. As the modeled rainfall event progresses, overland flow is routed through the overland planes until the flow reaches a channel location. This flow is then transformed into a channel flow component and routed through the channel network to the defined outlet location. During the flow routing process, channel losses or gains are neglected.

The channel network defined in a CASC2D project is made up of links, numbered according to the computational order. A channel link is made up of connected grid cells, called the nodes of that particular link. Each node describes the channel reach represented by that node with geometric and hydraulic characteristics.

CASC2D simulations involving channel flow is able depict time varying backwater effects for simulated runoff flows.  These backwater effects are continuous as they are carried through all associated channel junctions within the defined stream network (Saghafian 1992).