ADMS-Airport is a comprehensive modelling tool for air quality management of airports. It has many of the features of the ADMS-Urban model and includes allowance for all relevant emission sources at airports and utilises algorithms designed specifically to model dispersion from aircraft engines. 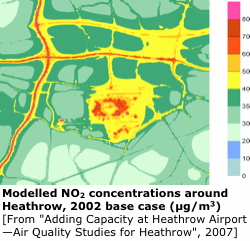 ADMS-Airport has been used to model air quality at London's Heathrow airport for the 2002 base case and future year scenarios as part of the Department for Transport's (DfT) Project for Sustainable Development of Heathrow (PSDH)—Adding Capacity at Heathrow.

ADMS-Airport is also one of the approved models for the International Civil Aviation Organisation, Committee on Aviation Environmental Protection (ICAO CAEP), Models and Databases Group. The approved models create projections at all major airports worldwide that are used by the ICAO Assembly as the basis for decision making on environmental matters.

ADMS-Airport incorporates all the features of ADMS-Urban plus it is able to incorporate sources specific to an airport. ADMS-Airport is able to take into account the whole range of relevant emission sources: aircraft traffic, auxiliary power units, ground support equipment, road traffic, industrial, commercial, domestic and other less well-defined sources.

ADMS-Airport and EMIT (CERC's Emissions Inventory Toolkit) have been developed with a number of features to simplify the modelling process and help users. For example:

ADMS-Airport makes use of the ADMS jet model to calculate the impact of aircraft exhausts. The jet model calculates an integral solution to the equations of conservation of mass, momentum, heat and species, capturing the effect of the movement of the jet engine source in reducing the effective buoyancy of the exhaust. This is particularly important in capturing the near-field dispersion from the high momentum, buoyant take-off ground roll sources.

To model the airport's flight schedule in detail users can construct up to 500 annual hourly profiles. These detailed schedules can also be used for detailed modelling of non-airport sources, such as the effect of school terms and public holidays on road traffic. For less detailed time dependent modelling ADMS-Airport allows up to 500 diurnal and 500 monthly profiles plus wind direction dependence for any source.