Century is a general computer model of plant-soil ecosystems which simulates the dynamics of grasslands,forests,crops,and savannas. It incorporates simplified representations of key processes relating to carbon assimilation and turnover,based on existing models.

Century is a general computer model pf plant-soil ecosystems which simulates the dynamics od grasslands,forests,crops,and savannas. It incorporates simplified representations of key processes relating to carbon assimilation and turnover, based on existing models. Century has been previously described in detail and is designed to work with the View output modele of the program "Timzero: the integrated modelling environment"

Century simulates the dynamics of carbon(C),nitrogen(N),physphorue(P),and sulphur(S) for different plant-soil systems. Different plant prodection submodels for grasslands,forests and crops are linked to a common soil organic matter (SOM) submodel,with grasses and trees both included under Century;savanna option. The SOM submodel simulates the flow of selected elements through the different inorganic and organic pools in the soil,running on a monthly time step. 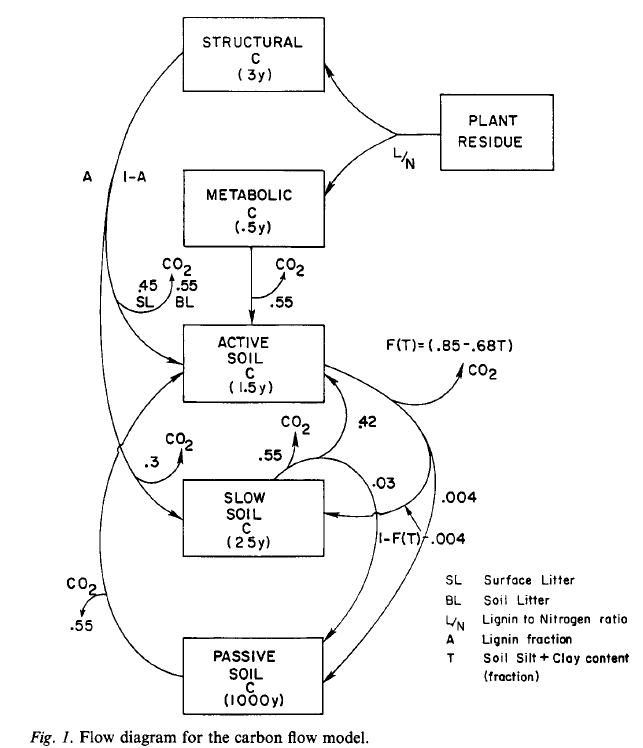 The nitrogen submodel has the same basic structure as the carbon flow diagram and we assume that N is bonded mostly to carbon. We assume that the C:N ratio of structural (150), active (8), slow (11), and passive (11) soil fractions remain fixed. The N content of the metabolic pools is allowed to float as a function of the N content of the incoming plant residue. The N flows are assumed to be stochiometrically related to the carbon flows and are equal to the product of the carbon flow rate and fixed N:C ratio of the state variables that receive the carbon. The N attached to carbon lost in respiration (30-80% of the carbon flow) is assumed to be mineralized. Given the C:N ratios of the state variables and the CO2 losses associated with each flow, decomposition of the metabolic residue and active, slow and passive soil organic matter fractions results in a net mineralization of nitrogen, while decomposition of structural residue results in immobilization of N. This model also uses simple equations to represent N inputs due to atmospheric deposition and soil and plant N fixation. The losses of N due to leaching, gaseous losses of N compounds, crop removal and erosion are also represented.

Considerable progress has been made in elucidation of specific parts of the P cycle and the development of simulation models of the phosphorus cycle. We modified these models to simulate phosphorus flows in a model operating in monthly time steps (see Fig. 2). The primary mineral source of P in most soils is mainly apatite in the parent material. Secondary and occluded P minerals are formed from these phosphorites during the weathering and formation of soils. At the same time as physical and chemical weathering transforms primary P to secondary and occluded P forms, organisms in the soil and plant roots take up P from the solution. Phosphorus is  incorporated into biomass and supports C assimilation and fixation. As more P becomes fixed through plant and soil microbial uptake, larger amounts become immobilized in organic matter to the extent that the organic accumulation depends directly on the P available for biological consumption. Microbial biomass is instrumental in the redistribution and/or accumulation of organic P compounds in soils. In the phosphorus submodel we followed the carbon submodel with respect to turnover times of the various active, slow, and passive fractions. The active soil P fraction consisting of microbial biomass and metabolites has C:P ratios ranging from 30 to 80. The most stable organic P forms were placed in the passive fraction, with C:P ratios ranging from 20 to 200, while intermediate forms in the slow soil fraction have C:P ratios ranging from 90 to200. Evidence for these transformations is found in the P fractionation data of Tiessen et al. The organic P flows are calculated by multiplying the carbon flow rate times the C:P ratio for the state variable receiving the carbon. The C:P ratio is fixed for the structural P box (500), while the metabolic P box receives the remainder of P in plant residue P that is divided between the structural and metabolic P. 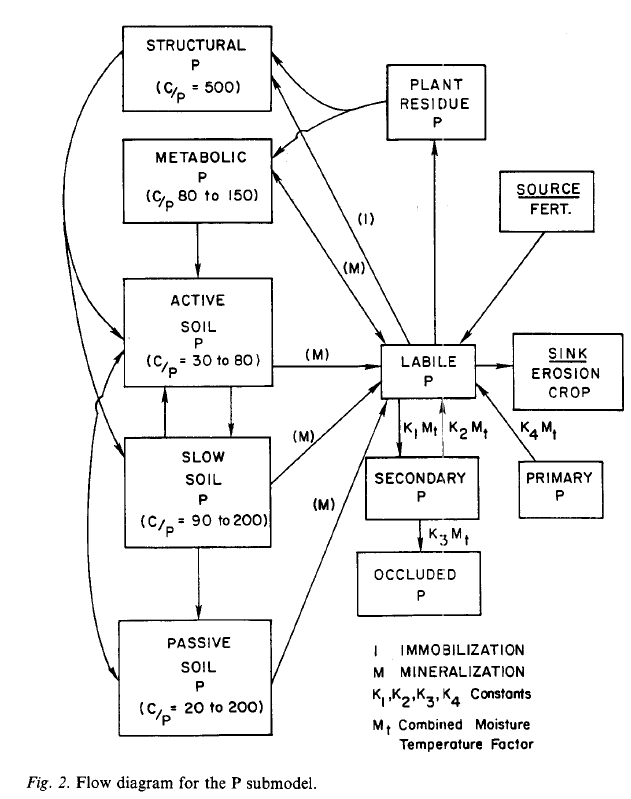 Progress has been made in developing a conceptual sulfur cycle in soil and in understanding its effect on soil organic matter composition in native grassland and cultivated fields.In addition, separate laboratory studies have clarified the mode of operation and dynamics of processes important to the transformation of S in soil ecosystems. We have used existing data and computer models to develop a simplified sulfur flow model as part of our soil organic matter model (Fig. 4). 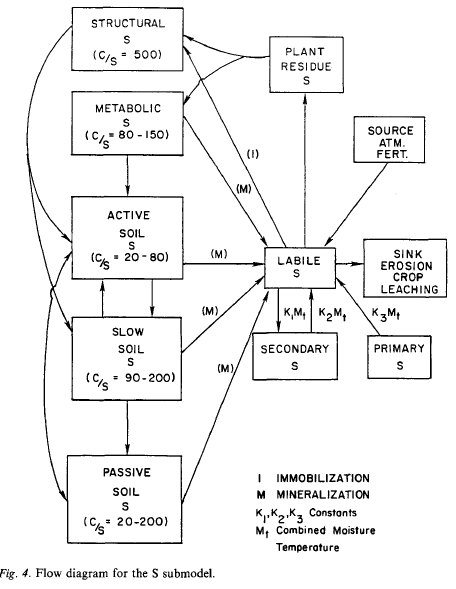