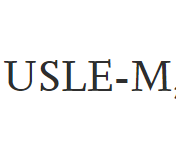 USLE-M is better suited to predicting event erosion and also provides a mechanism for accounting for the impact of upslope runoff on erosion that is not available with the USLE.

The USLE is designed to predict the long term average annual erosion rather than event erosion even though that long term average annual erosion is dependent on erosion that results from a large number of individual events. It can be argued that the inability of the USLE to accurately predict event erosion does not particularly matter provided it can predict the impact of those events that have a major impact on the average annual erosion. In many cases, a few large events contribute most to that average annual value. Consequently, since the EI30 index provides a reasonable capacity to predict the impact of large events on the average annual erosion, it can be argued that there is no need to replace it with an index that considers runoff explicitly. However, with models like AGNPS, the objective is changed from predicting the long term average annual soil loss to event erosion and thus, a more event orientated erosivity index is required. Kinnell (1995) recognised this and proposed that(11)Re=∑t=1T(QEA)twhere T is the number of time units in a rainfall event, and Q is the runoff and EA is the rainfall energy in each time unit, could be used as an alternative to EI30 and that the excess rainfall rate (Ix, the difference between the rainfall rate and the infiltration rate) could be used as a surrogate for Q. This approach assumes that short term variations in sediment concentration (c) are directly related to EA. One difficulty associated with the use of Eq. (11) is that adequate knowledge of the short term variations values of Q (or Ix) and EA during a rainfall event is often lacking. However, Kinnell (1997) noted that(12)Ae=Qecbewhere(13)cbe=∑t=1TqtctQeand that cbe was dependent on the kinetic energy per unit quantity of rain (= E/Be where Be is event rainfall amount) and a measure of the peak rainfall intensity since the peak rainfall intensity tends to produce the highest sediment concentration and the highest runoff rate during a rainfall event. Kinnell observed that if I30 was assumed to provide an adequate measure of this intensity,(14)Re=QeI30E/Beand since the runoff ratio (QR) is given by,(15)QR=Qe/BeEq. (14) can be written as(16)Re=QREI30The resulting modified version of the USLE is referred to as USLE-M (Kinnell and Risse, 1998) and can, in its single event form, be written as(17)Ae=RUMeKUMeLSCUMePUMewhere RUMe = QR EI30, and the subscript UM indicates a parameter with values that differ from the USLE. It follows from Eq. (10) that(18)KUM=∑n=1N(Ae)n∑n=1N(QREI30)nwhen L = S = CUM = PUM =1.0. Similarly,(19)CUM=∑n=1N(Ae)nKUM∑n=1N(QREI30)nwhen L = S = PUM =1.0 and C ≠1.0. A similar expression is used to determine PUM. As with the USLE, CUM =1.0 for bare fallow, and PUM =1.0 for cultivation up and down the slope. Since variations in slope length have, in theory, no appreciable impact on runoff, and S values have been developed through observation that variations in slope gradient have no significant impact on runoff when L is held constant, arguably, the topographic factors used in the USLE or the Revised USLE (RUSLE) (Renard et al., 1997) still apply to USLE-M.

Fig. 1 provides a comparison of the abilities of the USLE and USLE-M to account for soil loss from a bare fallow runoff and soil loss plot in the USA. The logarithmic form of the Nash-Sutcliffe model efficiency statistic,(20)Z(log)=1−∑n=1N(logYO−logYC)2n∑n=1N(logYO−logYM)2nwhere YO is the measured value, YC the computed value and YM the mean of the measured values, is shown as an indicator of model performance. This version of the statistic is used here because it is influenced more by a model's performance with respect to small to medium erosion events than the normal version. Fig. 2 shows the Z(log) values for the two models plotted against the Gross Infiltration Ratios for runoff producing events (GIRrope) occurring on the plots at the 14 locations in the USA and one in Australia. The GIRrope value for each plot was calculated by(21)GIRrope=1−∑n=1N(Qe)n∑n=1N(Be)nfor only those rainfall events that produced runoff over the period of observation (usually 4 or more years). GIRrope generally has a lower value than the usual Gross Infiltration Ratio which is based on all rainfall events irrespective of whether they produced runoff or not. As can be seen from Fig. 2, USLE-M operates with an efficiency of about 80% without varying significantly as GIRrope varies. There is no gain in using USLE-M when the eroding surface is totally impermeable (GIRrope =0) but the efficiency of the USLE tends to fall as GIRrope increases. Data for 3 plots at Gunnedah, NSW, Australia are consistent with the results obtained in the USA (Fig. 2). The data presented in Fig. 2 indicate that the USLE operates best when soils are impervious or close to impervious and that, as a general rule, USLE-M will predict event soil loss better than the USLE if runoff can be estimated adequately. This result is consistent with the observation of Foster et al. (1982) that a major advantage of an erosivity index that includes runoff terms with rainfall terms in a product is the reduction of large overestimates of soil loss when runoff is negligible and rainfall amount and rates are great. Thus, for predicting event erosion such as in AGNPS, USLE-M is, in theory, a better model to use than the USLE.