The framework of the watershed system model designed for the HRB is shown in Figure 1. An ecohydrological model and an economic system model were bidirectionally coupled through two interface models, i.e., the land use and water resource models, within the framework of the watershed system model. The ecohydrological and economic models, as well as the interface models, interact with each other directly or indirectly through exchange variables such as flow and groundwater level, water allocation, and land-use types, as depicted along the arrows of Figure 1. Because of the differences in the model structure, the spatiotemporal resolutions, and the programming languages of the four main components, both offline and online integration strategies were employed in this study. The offline strategy refers to a loose coupling scheme through the exchange of input/output files, while the online strategy refers to a tight coupling approach at the source code level. 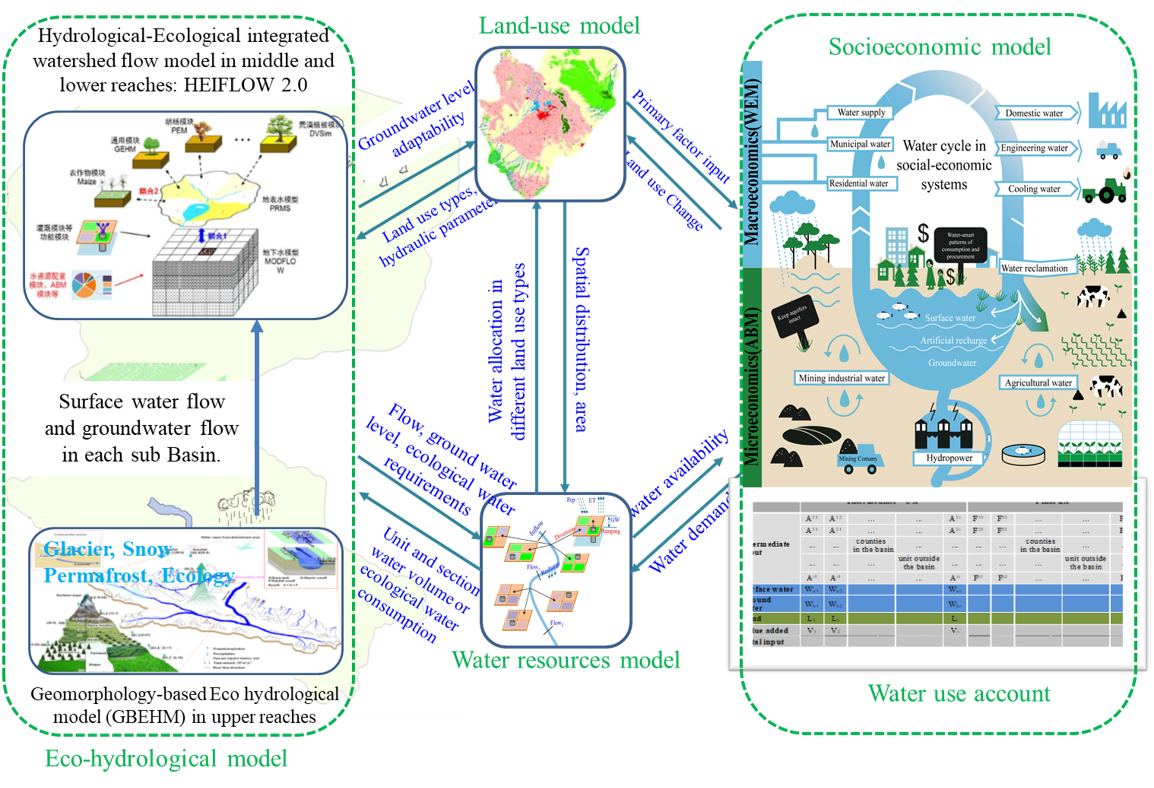 The ecohydrological model is composed of the GBEHM and HEIFLOW models. The GBEHM model is designed for the mountain cryosphere of the HRB. It inherits all of the functions of the geomorphology-based hydrological model (GBHM) and enhances the representations of the cryospheric processes of snow, glaciers, and frozen ground. The HEIFLOW model, however, is designed for the oasis-desert plains of the HRB. It is a fully coupled surface and groundwater model that can explicitly simulate ecological processes (e.g., vegetation dynamics and crop growth) and agricultural water management. The water-economic model (WEM) is an economic system model designed for the entire HRB, and it is developed mainly based on the input/output table. It is an indispensable component of the watershed system model. and plays a critical role in determining the water allocations and the land-use structure. The economic model was also coupled with the ABM to account for the social dimension of the watershed and the interactions between macro-economic and micro-economic behavior. The production, consumption, and accumulation economic behavior of peasant households in the ABM is the key component of the WEM, making it a bottom-up approach.

In addition, two interface models, i.e., the water resources model and the land use model, were included in the watershed system model. They mainly play a role in bridging the ecohydrological and economic system models. Three different irrigation modules were developed within the water resources model to describe the agricultural water management activities. One module distributes diverted water from rivers to farmlands, and the other allocates pumped groundwater to farmlands. The additional module simulates the demand-based diversion and pumping rates. The performance of the economy in the economic system model drives the changes in land use/cover, and the simulations of land-use changes are passed to the ecohydrological model. The critical feedback of the ecohydrological model to the socioeconomic model is the water allocation in the water resources model.