A daily process model, named Boreal Ecosystems Productivity Simulator was developed for estimating NPP for large areas by using remote sensing, gridded daily meteorological data, and soil data. With current computing technology, it is feasible to implement the daily process model at a regional scale with moderate resolutions (0.25-1.0 km). The combination of this relatively high spatial and temporal resolution modeling enables us to obtain reliable and spatially explicit NPP distribution.

BEPS was built based on a site-level (~10-2 km2)process model, FOREST-BGC (Running and Coughlan, 1988). The biological principles in FOREST-BGC were adopted for modeling the processes governing carbon and water flows in the soil-plant-atmosphere system because this model has been well documented and tested with measured NPP over various climatic zones in Oregon (Running, 1993). The model requires daily meteorological inputs and calculates NPP on a daily basis. This daily model captures, without excessive complexity, major ecosystem functionalities resulting from the diurnal variation in solar energy. It is computationally feasible for remote-sensing applications. The same model has also been extended to simulate ecological and hydrological processes at the landscape scale (Running et al., 1989) and has bee11 incorporated into the regional hydroecological simulation system (RHESSys) at watershed scale (~102-103 km2) (Band et al., 1991, 1993). To use FOREST-BGC at provincial and national levels in Canada (~106-107 km2), challenges exist in (1) searching for available data sources to satisfy the basic model input requirements and (2) incorporating data from different sources in the model and making them spatially and temporally compatible.

Recent developments in remote sensing, the geographical information system (GIS), and meteorolog have made it possible to overcome the first challenge. The most important inputs to BEPS include leaf area index (LAI), available water capacity (AWC) of soil, and daily meteorological  variables (shortwave radiation, maximum and minimum temperatures, humidity. and precipitation). Through the recent work of Chen and Cihlar (1996) and Cihlar et al. (1996), algorithms were developed to derive LA1 for various cover types from IO-day composites of the advanced ven high resolution radiometer (AVHRR) measurements. A digital land-cover map of Canada compatible with the AVHRR composites was available from Pokrant et al. (1991). The land-cover information is used in BEPS to determine a vegetationdevelopment foliage clumping index, biological parameters, and the initial carbon content of plant components for the modeling. Data on the available water-holding capacity of soil were compiled in a GIS soil database at Agriculture and Agri-Food Canada (Shields tit al., 1991). For daily meteorological data, conducting spatial extrapolation for an area of 106-107 km2 from only one meteorological station becomes inadequate-a scheme used in the original FOREST-BGC and RHESSvs for small-area applications. Therefore, a new scheme was developed in BEPS to employ gridded meteorological data generated either by meteorological analvsis models or from mcteorological station measurements.

BEPS was designed to address the second challenge. BEPS is a simulation system that integratrs the input data, automates the modeling, and products output of NPP and other ecological parameters. The input data required by BEPS are from different sollrces and of various forms (vector, raster), resolutions, and grid systems, as summarized in Table 1. The vector and scattered raster data were preprocessed into a griddrd raster format prior to simulation. Figure 1 shows the framework of BEPS, including the major modeling steps, the input data and their spatial resolutions. and temporal intervals. The input data were harmonized for their spatial and temporal compatibility. Vegetation and environment conditious were assumed to be homogeneous within an entity of 1 km2. Each entity was georeferenced (see the detail in the subsequent section on prowssing LAI ). For each entity, the meteorological data we’re bilinearly interpolated in BEPS from the input data with ~1-degree resolution; whereas, for the soil data with 0.02-degree resolution, the nearest-neighbor interpolation was used. The calculations of soil water content. cancopy  conductanice,photosynthesis, and respiration were based on the functionalities used in FOREST-BGC .The outputs of the model iuclude NPP, transpiration,evapotranspiration, soil watrr content, and other variables of interest. The outputs can be ,given for a userdefined period of time from 1 day to an entire year. 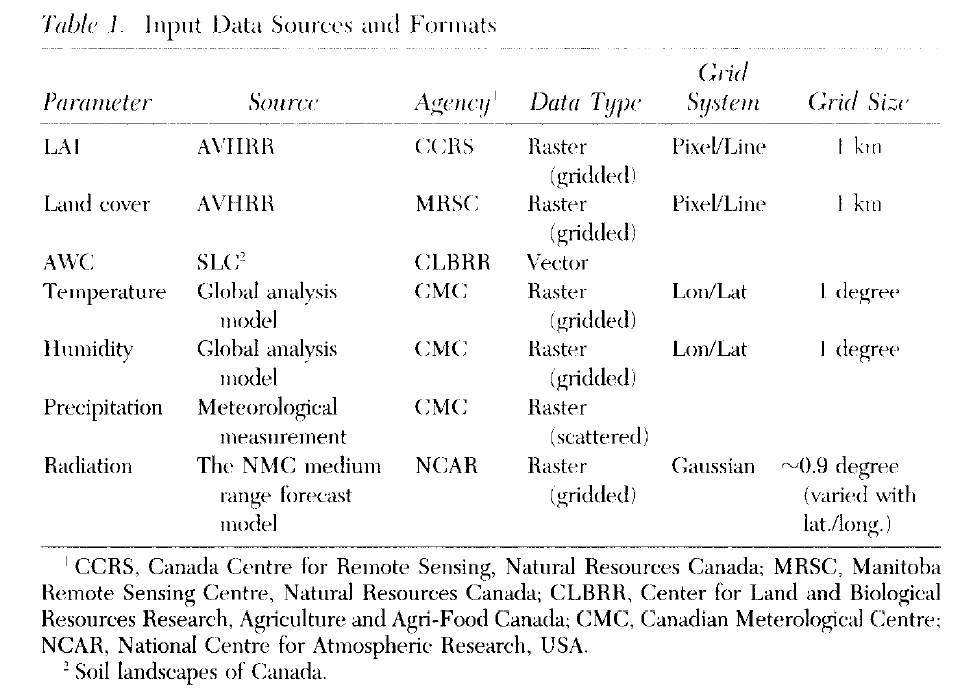 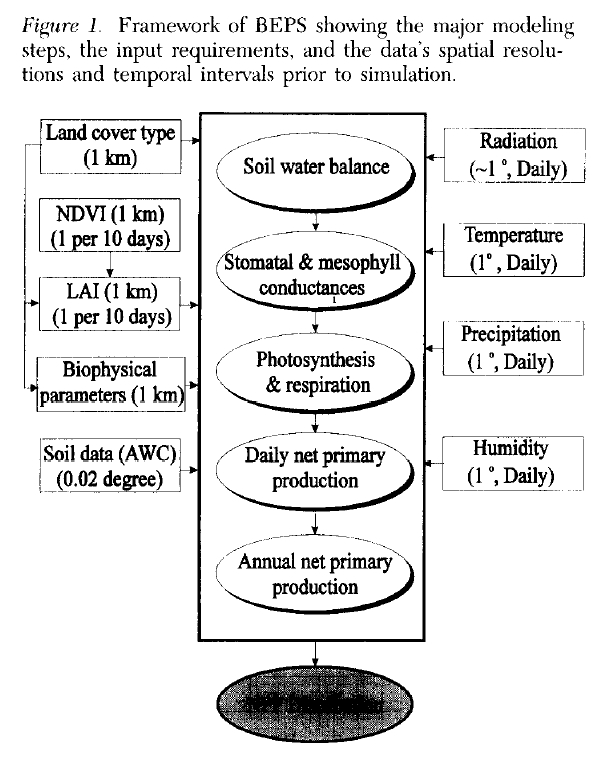