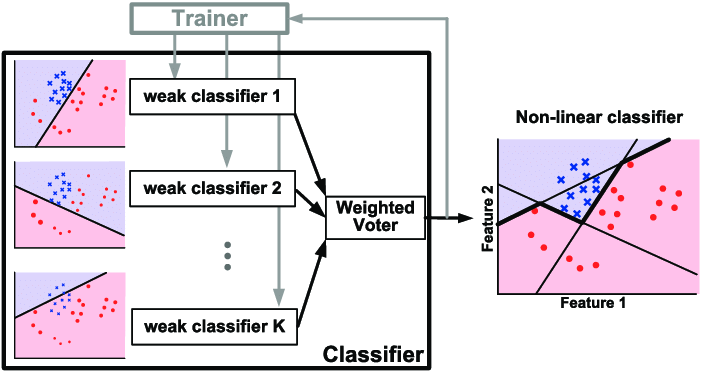 AdaBoost, short for Adaptive Boosting, is a machine learning meta-algorithm formulated by Yoav Freund and Robert Schapire, who won the 2003 Gödel Prize for their work. It can be used in conjunction with many other types of learning algorithms to improve performance. The output of the other learning algorithms ('weak learners') is combined into a weighted sum that represents the final output of the boosted classifier.

Problems in machine learning often suffer from the curse of dimensionality — each sample may consist of a huge number of potential features (for instance, there can be 162,336 Haar features, as used by the Viola–Jones object detection framework, in a 24×24 pixel image window), and evaluating every feature can reduce not only the speed of classifier training and execution, but in fact reduce predictive power. Unlike neural networks and SVMs, the AdaBoost training process selects only those features known to improve the predictive power of the model, reducing dimensionality and potentially improving execution time as irrelevant features don't need to be computed.

AdaBoost refers to a particular method of training a boosted classifier. A boost classifier is a classifier in the form

is a weak learner that takes an object {\displaystyle x}

as input and returns a value indicating the class of the object. For example, in the two-class problem, the sign of the weak learner output identifies the predicted object class and the absolute value gives the confidence in that classification. Similarly, the {\displaystyle T}

th classifier is positive if the sample is in a positive class and negative otherwise.

, for each sample in the training set. At each iteration {\displaystyle t}

, a weak learner is selected and assigned a coefficient {\displaystyle \alpha _{t}}

such that the sum training error {\displaystyle E_{t}}

of the resulting {\displaystyle t}

is the boosted classifier that has been built up to the previous stage of training, {\displaystyle E(F)}

is the weak learner that is being considered for addition to the final classifier.

At each iteration of the training process, a weight {\displaystyle w_{i,t}}

on that sample. These weights can be used to inform the training of the weak learner, for instance, decision trees can be grown that favor splitting sets of samples with high weights.

where each item {\displaystyle x_{i}}

-th iteration our boosted classifier is a linear combination of the weak classifiers of the form:

, with another weight {\displaystyle \alpha _{m}}

should be. We define the total error {\displaystyle E}

as the sum of its exponential loss on each data point, given as follows:

that we just determined, we differentiate:

Setting this to zero and solving for {\displaystyle \alpha _{m}}

does not depend on {\displaystyle i}

, so it follows that:

which is the negative logit function multiplied by 0.5.

Thus we have derived the AdaBoost algorithm: At each iteration, choose the classifier {\displaystyle k_{m}}

, and finally use this to improve the boosted classifier {\displaystyle C_{m-1}}