WinTR-55 is a single-event rainfall-runoff small watershed hydrologic model. The model generates hydrographs from both urban and agricultural areas and at selected points along the stream system. Hydrographs are routed downstream through channels and/or reservoirs. Multiple sub-areas can be modeled within the watershed.

WinTR-55 uses the TR-20 (NRCS 2002b) model for all of the hydrograph procedures: generation, channel routing, storage routing, and hydrograph summation. Figure 10 is a diagram showing the WinTR-55 model, its relationship to TR-20, and the files associated with the model. 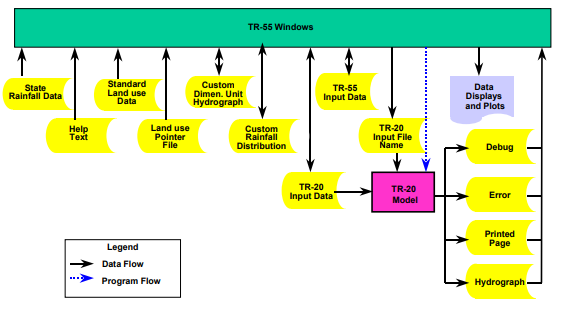