The observations of gully morphology and dynamics at West Bijou Creek suggest the following conceptual model (Figure). Gully head cuts and sidewalls retreat primarily by weathering and collapse of exposed soil, sediment, and bedrock. Similar to findings by Montgomery[1999], we observe that drying of these materials between storms leads to contraction as the smectite clays dehydrate, which forms networks of fractures and creates fracture-bounded blocks subparallel to gully heads and walls. These blocks then collapse either when crack propagation proceeds past the point where the cohesion force can support the block’s weight or when temporary near-surface saturation adds pore pressure [Istanbulluoglu et al., 2005;Montgomery, 1999] and reduces apparent cohesion. Winter block detachment may also occur through ice-lens growth and subsequent melting. The detached material accumulates along the base of the walls and headcut. Debris delivered to the base of the headcut is remobilized during summer flash floods and redeposited further downstream. These processes contribute to the upstream migration of the headcut as well as widening of the valley downstream of the headcut, as walls gradually retreat from the valley centerline.

In laboratory headcuts with a relatively small ratio of height to flow depth, plunge pool scour plays an important role in undermining the step face. For headcuts with a large ratio of height to flow depth, such as those shown in Figure 4, we hypothesize that the direct influence of plunge pool scour is relatively minor. For example, following a plunge pool erosion event in June 2011, we observed that the center of the plunge pool was located 1.5m from the headcut face, with an approximate diameter of 0.5m and a depth of 0.3m. Because the margins of the pool were separated from the face, the plunging jet had limited contact with the wall face and was fully aerated. Moreover, similar toMontgomery[1999], we saw no evidence of undercut- ting of the headcut from either a plunging jet or turbulence from a plunge pool. Therefore, we assume that jet impingement erosion is negligible. 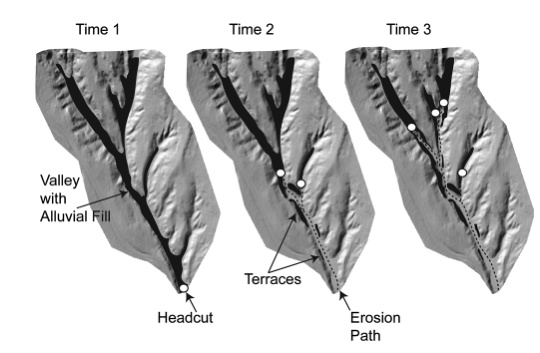