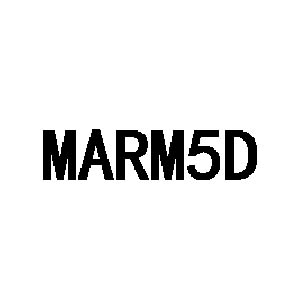 Hillslope surface armouring and weathering processes have received little attention in geomorphologic and hydrologic models due to their complexity and the uncertainty associated with them. Their importance, however, in a wide range of spatial processes is well recognized. A physically based armouring and weathering computer model (ARMOUR) has previously been used to successfully simulate the effect of these processes on erosion and soil grading at a hillslope scale. This model is, however, computationally complex and cannot realistically be applied over large areas or over long periods of time. A simplified process conceptualization approach is presented (named mARM) which uses a novel approach of modeling physical processes using transition matrices, which is orders of magnitude faster. We describe in detail the modeling framework. We calibrate and evaluate the model against ARMOUR simulations and show it matches ARMOUR for a range of conditions. The computational efficiency of mARM allowed us to easily examine time- and space-varying relationships between erosion and physical weathering rates at the hillslope scale. For erosion-dominated slopes the surface coarsens over time, while for weathering domination the surface fines over time. When erosion and weathering are comparable in scale a slope can be weathering-dominated upslope (where runoff and therefore erosion is low) and armouring-dominated downslope. In all cases, for a constant gradient slope the surface armour coarsens downslope as a result of a balance between erosion and weathering. Thus even for weathering-dominated slopes the surface grading catena is dependent on armouring through the balance between weathering and armouring. We also observed that for many slopes the surface initially armours but, after some period of time (space- and rate-dependent), weathering begins to dominate and the surface subsequently fines. Depending on the relative magnitude of armouring and weathering the final equilibrium grading of the slope may be finer or coarser than the initial conditions. The results demonstrate the complexity of the evolution of surface grading and the balance between the armouring and weathering processes. They also point toward inherent organization of surface grading on the hillslope driven by erosion even for extremely high weathering rates. The implications for natural landforms are discussed. We also plot and quantify, for the first time, a log-log relationship between surface grading, contributing area and slope for a range of weathering rates. The results show that this log-log relationship is robust, the log-log scaling is constant in space, and true even for extreme weathering rates. This has potentially important implications for soil geomorphology. It suggests that an analytical solution can be found for soil grading catena. This might allow us to more easily map soil distribution as a function of topographic characteristics.