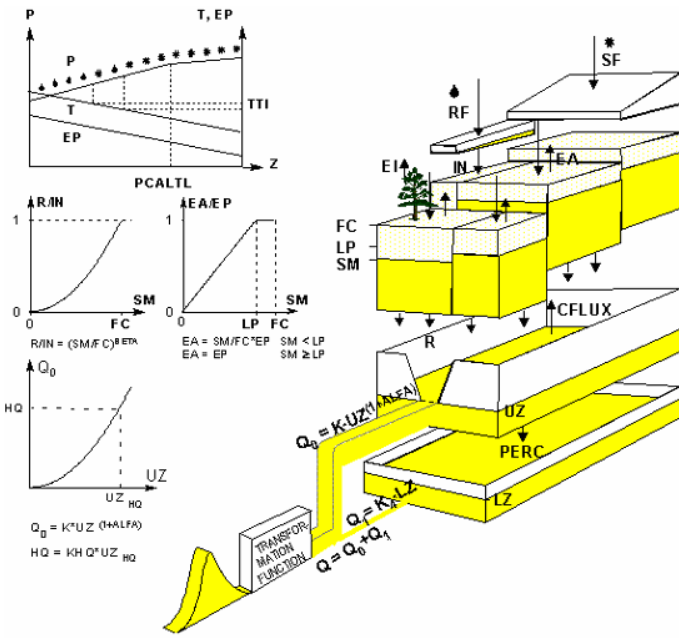 The HBV model is a rainfall-runoff model, which includes conceptual numerical descriptions of hydrological processes at the catchment scale.

The HBV model (Bergström, 1976, 1992) is a rainfall-runoff model, which includes conceptual numerical descriptions of hydrological processes at the catchment scale. The general water balance can be described as

In different model versions HBV has been applied in more than 40 countries all over the world. It has been applied to countries with such different climatic conditions as for example Sweden, Zimbabwe, India and Colombia. The model has been applied for scales ranging from lysimeter plots (Lindström and Rodhe, 1992) to the entire Baltic Sea drainage basin (Bergström and Carlson, 1994; Graham, 1999).

HBV can be used as a semi-distributed model by dividing the catchment into subbasins. Each subbasin is then divided into zones according to altitude, lake area and vegetation. The model is normally run on daily values of rainfall and air temperature, and daily or monthly estimates of potential evaporation. The model is used for flood forecasting in the Nordic countries, and many other purposes, such as spillway design floods simulation (Bergström et al., 1992), water resources evaluation (for example Jutman, 1992, Brandt et al., 1994), nutrient load estimates (Arheimer, 1998).

The model consists of subroutines for meteorological interpolation, snow accumulation and melt, evapotranspiration estimation, a soil moisture accounting procedure, routines for runoff generation and finally, a simple routing procedure between subbasins and in lakes. It is possible to run the model separately for several subbasins and then add the contributions from all subbasins. Calibration as well as forecasts can be made for each subbasin. For basins of considerable elevation range a subdivision into elevation zones can also be made. This subdivision is made for the snow and soil moisture routines only. Each elevation zone can further be divided into different vegetation zones (e.g., forested and non-forested areas).

The model structure of HBV-96 (Lindström et al., 1997) is presented schematically in Figure 1. The figure only shows the most important characteristics of the model, and some clarifications are given below. The classes of land use are normally open areas, forests, lakes and glaciers. It is possible to use different values of SFCF, SFDIST, CFMAX, ECORR and the interception storage capacity IC for different vegetation zones, but the ratios between the values for forested and non forested areas are kept constant.

Figure 1. Schematic structure of one subbasin in the HBV-96 model (Lindström et al., 1997), with routines for snow (top), soil (middle) and response (bottom).

Optimal interpolation of precipitation and temperature

The standard model uses a rather crude weighting routine and lapse rates for computation of areal precipitation and air temperatures. In HBV-96 a geostatistical method, based on optimal interpolation (e.g., Daley, 1991) was introduced. This method is frequently used in meteorological applications, and similar to kriging. The method may be based purely on data from meteorological stations and general knowledge of the precipitation/temperature pattern. One may also add the information included in a meteorological model and take into consideration, e.g., topography and prevailing winds, and such a grid was recently developed for 40 years of daily values for Sweden (Johansson, 2002).

The standard snowmelt routine of the HBV model is a degree-day approach, based on air temperature, with a water holding capacity of snow which delays runoff. Melt is further distributed according to the temperature lapse rate and is modelled differently in forests and open areas. A threshold temperature, TT, is used to distinguish rainfall from snowfall. If the parameter TTINT is used, the threshold is extended to an interval and within this interval precipitation is assumed to be a mix of rain and snow, decreasing linearly from 100 % snow at the lower end to 0 % at the upper end.

The snowpack is assumed to retain melt water as long as the amount does not exceed a certain fraction of the snow. When temperature decreases below the threshold temperature, this water refreezes gradually. Glacier melt will occur only in glacier zones and follows the same type of formula as for snowmelt, but with another degree-day factor. No glacier melt occurs as long as there is snow in the zone. A snow distribution can be made in each zone by subdividing it into a number of subareas with different snow accumulation.. Normally three snow classes are used. This accounts for re-distribution of snow, snowdrift and snow that is trapped in creeks and other irregularities in rugged terrain.

The standard HBV model is run with monthly data of long term mean potential evapotranspiration, usually based on the Penman formula (Penman, 1948). These data are adjusted for temperature anomalies (Lindström and Bergström, 1992). As an alternative, daily values can be calculated as being proportional to air temperature, but with monthly coefficients of proportionality. From the interception storage an evaporation equal to the potential evaporation will occur as long as water is available, even if it is stored as snow. If the interception routine is used it is also possible to reduce the soil evaporation to avoid values of total evaporation that are too large.

The interception routine is, however, not always used. Instead the potential evapotranspiration from forested areas is often assumed to be 15 % higher than that from open areas, based on the findings by Johansson (1993). The potential evapotranspiration is thus a function of the time of the year, the current air temperature, vegetation, elevation, and as an option, precipitation. Evaporation from lakes will occur only when there is no ice. Ice conditions are modelled with a simple weighting subroutine on air temperature, which results in a lag between air temperature and lake temperature. It is assumed that the lake is frozen when the weighted temperature drops below zero.

The soil moisture accounting of the HBV model is based on a modification of the bucket theory in that it assumes a statistical distribution of storage capacities in a basin. This is the main part controlling runoff formation. This routine is based on the three parameters, BETA, LP and FC, as shown in the middle section of Figure 1. BETA controls the contribution to the response function or the increase in soil moisture storage from each millimeter of rainfall or snow melt. The ration ?Q /?P is often called runoff coefficient, and ?Q is often called effective precipitation. LP is a soil moisture value above which evapotranspiration reaches its potential value, and FC is the maximum soil moisture storage in the model. The parameter LP is given as a fraction of FC.

The runoff generation routine is the response function which transforms excess water from the soil moisture zone to runoff. It also includes the effect of direct precipitation and evaporation on a part which represents lakes, rivers and other wet areas. The function consists of one upper, non-linear, and one lower, linear, reservoir. These are the origin of the quick (superficial channels) and slow (base-flow) runoff components of the hydrograph. Level pool routing is performed in lakes located at the outlet of a subbasin. The division into submodels, defined by the outlets of major lakes (not shown in the figure), is thus of great importance for determining the dynamics of the generated runoff. The routing between subbasins can be described by the Muskingum method (e.g., Shaw, 1988) or simple time lags. Each one of the subbasins has individual response functions.

Precipitation on lakes will be the same as for a non-forested zone at the same altitude and will be added to the lake water regardless of ice conditions in the same way for both rain and snow. Evaporation from lakes will equal the potential evaporation but can be modified by a parameter and will occur only when there is no ice. Transformation of runoff is taking place after water routing through the lake according to a rating curve. If no specific rating curve for the lake is given as input, the model will assume a general rating curve.

Although the automatic calibration routine is not a part of the model itself, it is an essential component in the practical work. The standard criterion (Lindström, 1997) is a compromise between the traditional efficiency, R2 by Nash and Sutcliffe (1970) and the relative volume error, RD.

In practice the optimisation of only R2 often results in a remaining volume error. The criterion above gives results with almost as high R2 values and practically no volume error. The best results are obtained with w close to 0.1. The automatic calibration method for the HBV model developed by Harlin (1991) used different criteria for different parameters. With the simplification to one single criterion, the search method could be made more efficient. The optimisation is made for one parameter at a time, while keeping the others constant. The one-dimensional search is based on a modification of the Brent parabolic interpolation (Press et al., 1992).

A comprehensive re-evaluation of the model was carried out during the 1990's and resulted in the present model version called HBV-96 (Lindström et al., 1997). The objectives were to improve the potential for making use of spatially distributed data in the model, to make the model more physically sound and to improve model performance. The model revision led to slight changes in the process descriptions for snow accumulation and melt, evapotranspiration, groundwater discharge and automatic calibration. When combined, the modifications led to significant improvements in model performance. In seven test basins the average value of the efficiency criterion R2 increased from 86 to 89%, with improvements in both the calibration and verification periods.

In general the results did not justify any increased resolution in time or space unless more detailed data are to be used as input or for validation. The option of higher resolution in space is also necessary for future integration of spatially distributed field data in the model. The improvements in model performance was more due to the changes in the processing of input data and the new calibration routine than due to the changes in the process descriptions of the model.