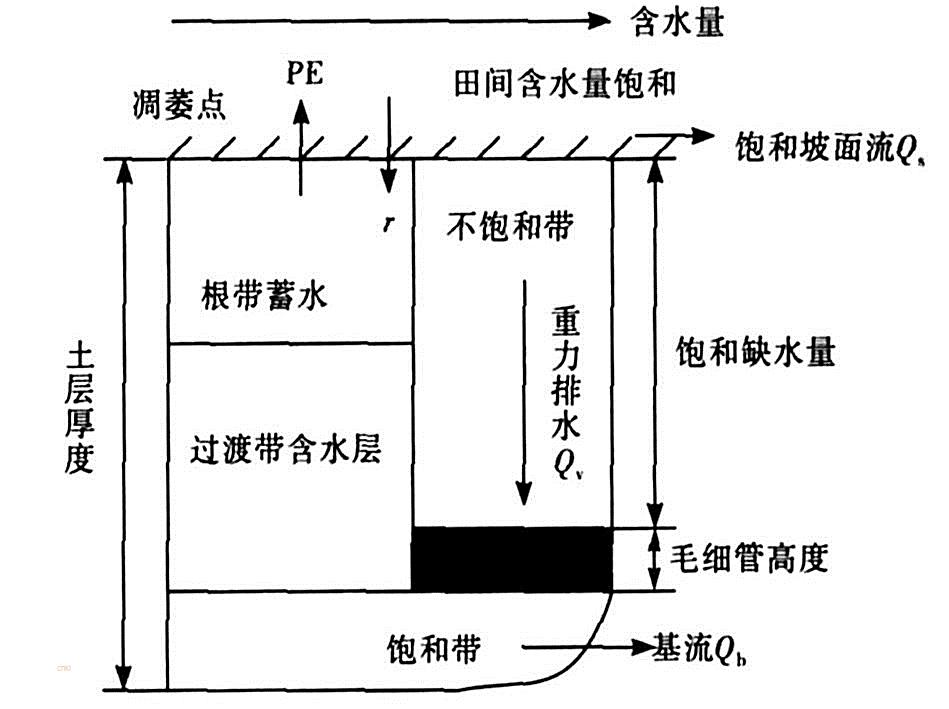 TOPMODEL is a physically-based, semi-distributed, variable-source area rainfall-runoff model, and is based on the Topographic Wetness Index (TWI).

TOPMODEL, first proposed by Beven and Kirkby (1979), is a physically based, semi-distributed, variable-source area rainfall-runoff model, and is based on the TWI proposed by Kirkby (1975). Three main assumptions underlie most formulations of TOPMODEL (Beven and others, 1995): 1. The hydraulic gradient of the water table can be approximated by the land-surface slope. 2. Dynamic conditions can be adequately represented by a steady-state approximation. 3. The saturated hydraulic conductivity decreases exponentially with depth. TOPMODEL is expected to be best applied in watersheds where these assumptions hold, for example, humid watersheds with shallow soils, which are likely to have topographic controls on water-table depth (Beven and others, 1995). TOPMODEL groups areas of hydrological similarity using a topographically based wetness index and simulates runoff generation from several sources based on calculated watershed storage and storage deficits.

The TWI represents the local subsurface hydraulic conditions by combining the local hydraulic gradient (approximated by the local surface slope) and the volume of water draining through a point (proportionate to the upslope contributing area). The TWI is defined as

TWI is the topographic wetness index, in ln(meters);

ln is the natural logarithm;

α is the upslope contributing area per unit contour length, in meters, and

tan β is the local slope.

and is typically calculated on a spatially distributed basis using DEMs. High values of the TWI indicate locations that have large contributing areas and low slopes and that are likely to be saturated; areas with high TWI values often are found along streams, in areas of groundwater discharge, and wetlands (fig. 3) (Wolock and Price, 1994). Low values of TWI indicate areas unlikely to be saturated, with small contributing areas and high slopes; areas with low TWI values typically are found at the top of hillslopes and in areas of groundwater recharge. In many versions of TOPMODEL (including the version used in this investigation), the TWI is used to group hydrologically similar areas in the watershed; calculations then are performed in a semi-distributed manner on the groups rather than on a fully distributed basis. In TOPMODEL, the vertical profile of hydraulic conductivity is assumed to follow an exponential decay of the form:

Kz is the hydraulic conductivity at depth z, in millimeters per hour;

K0 is the hydraulic conductivity at the surface, in millimeters per hour;

m is a scaling parameter, in millimeters;

ndrain is the readily drained soil porosity; and,

z is the depth from the surface, in millimeters.

Sx is the local saturation deficit, in millimeters;

S is the watershed-average saturation deficit, in millimeters;

m is a scaling parameter, in millimeters;

Λ is the watershed average topographic wetness index, in ln(meters); and

TWIx is the local topographic wetness index, in ln(meters).

Potential evapotranspiration is calculated using the Hamon method (Hamon, 1961). Precipitation that falls is first used to satisfy potential evapotranspiration, and then infiltrates into the unsaturated zone and may drain to the saturated zone; a macropore-flow term allows a percentage of precipitation to infiltrate directly to the saturated zone. Evapotranspiration, when not satisfied from precipitation, is taken from the root zone at a rate proportional to the root-zone storage (Beven and others, 1995). Precipitation that falls on open water areas (including lakes and streams) immediately becomes streamflow. To account for attenuation in lakes, an exponential decay function is applied to the portion of flow in the watershed that drains through lakes.