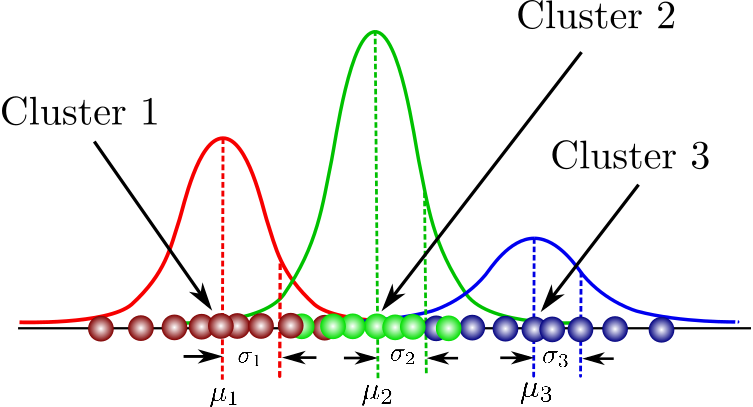 In statistics, a mixture model is a probabilistic model for representing the presence of subpopulations within an overall population, without requiring that an observed data set should identify the sub-population to which an individual observation belongs.

A typical finite-dimensional mixture model is a hierarchical model consisting of the following components:

Mathematically, a basic parametric mixture model can be described as follows:

In a Bayesian setting, all parameters are associated with random variables, as follows:

Assume that we observe the prices of N different houses. Different types of houses in different neighborhoods will have vastly different prices, but the price of a particular type of house in a particular neighborhood (e.g., three-bedroom house in moderately upscale neighborhood) will tend to cluster fairly closely around the mean. One possible model of such prices would be to assume that the prices are accurately described by a mixture model with K different components, each distributed as a normal distribution with unknown mean and variance, with each component specifying a particular combination of house type/neighborhood. Fitting this model to observed prices, e.g., using the expectation-maximization algorithm, would tend to cluster the prices according to house type/neighborhood and reveal the spread of prices in each type/neighborhood. (Note that for values such as prices or incomes that are guaranteed to be positive and which tend to grow exponentially, a log-normal distribution might actually be a better model than a normal distribution.)

Topics in a document

Assume that a document is composed of N different words from a total vocabulary of size V, where each word corresponds to one of K possible topics. The distribution of such words could be modelled as a mixture of K different V-dimensional categorical distributions. A model of this sort is commonly termed a topic model. Note that expectation maximization applied to such a model will typically fail to produce realistic results, due (among other things) to the excessive number of parameters. Some sorts of additional assumptions are typically necessary to get good results. Typically two sorts of additional components are added to the model:

The following example is based on an example in Christopher M. Bishop, Pattern Recognition and Machine Learning.

Imagine that we are given an N×N black-and-white image that is known to be a scan of a hand-written digit between 0 and 9, but we don't know which digit is written. We can create a mixture model with {\displaystyle K=10}

different components, where each component is a vector of size {\displaystyle N^{2}}

of Bernoulli distributions (one per pixel). Such a model can be trained with the expectation-maximization algorithm on an unlabeled set of hand-written digits, and will effectively cluster the images according to the digit being written. The same model could then be used to recognize the digit of another image simply by holding the parameters constant, computing the probability of the new image for each possible digit (a trivial calculation), and returning the digit that generated the highest probability.