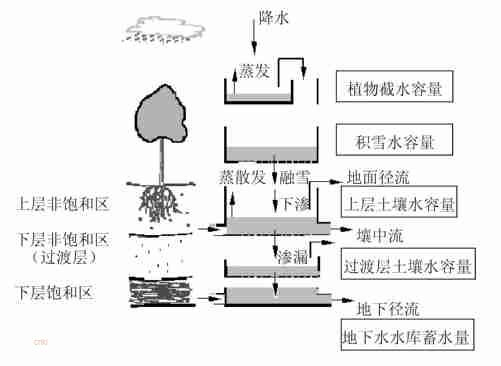 TOPKAPI model simulates the spatial distribution of basin characteristic parameters, precipitation and hydrological response with orthogonal grid system (DEM grid) and horizontal soil column corresponding to each grid in horizontal and vertical directions respectively. It is based on the combination of kinematic method and watershed topography. Watershed topography is described by digital elevation model (DEM), which subdivides the study area with square grid, and the grid size changes with the scale of the study area or problem. Each cell is a calculation node reflecting the physical characteristics of the model (mass balance and momentum balance). The runoff route and slope are estimated according to the maximum elevation difference between adjacent units in DEM.

[2]Numerical algorithm of distributed TOPKAPI model and its application[J].Water Science and Engineering,2008,1(04):14-21.