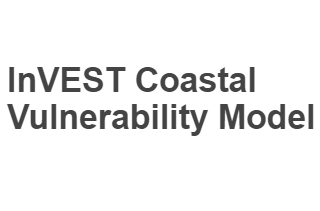 The InVEST Coastal Vulnerability model uses geophysical and natural habitat characteristics of coastal landscapes to compare their exposure to erosion and flooding in severe weather.

Faced with an intensification of human activities and a changing climate, coastal communities need to better understand how modifications of the biological and physical environment (i.e. direct and indirect removal of natural habitats for coastal development) can affect their exposure to storm-induced erosion and flooding (inundation). The InVEST Coastal Vulnerability model produces a qualitative estimate of such exposure in terms of a vulnerability index, which differentiates areas with relatively high or low exposure to erosion and inundation during storms. By coupling these results with global population information, the model can show areas along a given coastline where humans are most vulnerable to storm waves and surge. The model does not take into account coastal processes that are unique to a region, nor does it predict long- or short-term changes in shoreline position or configuration.

Model inputs, which serve as proxies for various complex shoreline processes that influence exposure to erosion and inundation, include: a polyline with attributes about local coastal geomorphology along the shoreline, polygons representing the location of natural habitats (e.g., seagrass, kelp, wetlands, etc.), rates of (observed) net sea-level change, a depth contour that can be used as an indicator for surge level (the default contour is the edge of the continental shelf), a digital elevation model (DEM) representing the topography of the coastal area, a point shapefile containing values of observed storm wind speed and wave power, and a raster representing population distribution.

Outputs can be used to better understand the relative contributions of these different model variables to coastal exposure and highlight the protective services offered by natural habitats to coastal populations. This information can help coastal managers, planners, landowners and other stakeholders identify regions of greater risk to coastal hazards, which can in turn better inform development strategies and permitting. The results provide a qualitative representation of coastal hazard risks rather than quantifying shoreline retreat or inundation limits.

Coastal regions, which are constantly subject to the action of ocean waves and storms, naturally experience erosion and inundation over various temporal and spatial scales. However, coastal erosion and inundation pose a threat to human populations, activities and infrastructure, especially within the context of a changing climate and increasing coastal populations. Moreover, these increases in anthropogenic pressure can lead to the loss and degradation of coastal ecosystems and their ability to provide protection for humans during storms. Thus, it is important to understand the role of various biological and geophysical factors in increasing or decreasing the threat of coastal erosion and inundation in order to better plan for future development. In particular, it is important to know how natural habitats can mitigate the forces responsible for coastal erosion and inundation so that management actions might best preserve the protective services provided by coastal ecosystems.

A number of models estimate the vulnerability of coastal regions to long-term sea level rise, erosion and inundation based on geophysical characteristics (Gornitz et al. 1991, Hammar-Klose and Thieler 2001, Cooper and McLaughlin 1998). There are also methods to qualitatively estimate the relative role natural habitats play in reducing the risk of erosion and inundation of particular areas (WRI 2009, Bush et al. 2001). However, few models map the relative vulnerability of coastal areas to erosion and inundation based on both the geophysical and natural habitat characteristics of a region. It is our aim to fill that gap with the Coastal Vulnerability model.

The Coastal Vulnerability model produces a qualitative index of coastal exposure to erosion and inundation as well as summaries of human population density in proximity to the coastline. The model does not value directly any ecoystem service, but ranks sites as having a relatively low, moderate or high risk of erosion and inundation. It is relatively simple to use and quick to run, and it can be applied in most regions of the world with data that are, for the most part, relatively easy to obtain.

Model outputs are geospatial datasets, with a spatial resolution defined by the modeler, and can be overlaid with other spatial information for users to perform further analysis as they see fit. By highlighting the relative role of natural habitat at reducing exposure and showing the areas where coastal populations are threatened, the model can be used to investigate how some management action or land use change can affect the exposure of human populations to erosion and inundation.

The InVEST Coastal Vulnerability model produces an exposure index rank for each point along a coastline at an interval specified by the user. The exposure index represents the relative exposure of different coastline segments to erosion and inundation caused by storms within the region of interest. The coastal population raster shows the distribution of human population density within the coastal region of interest. The index is constructed using up to seven bio-geophysical variables. These variables represent the variations in natural biological and geomorphic characteristics across the region, the rate or amount of sea-level rise, the local bathymetry and topography, and the relative wind and wave forcing associated with storms. The model assesses the exposure of each shore segment within the domain of interest, relative to all other shore segments. Model outputs are potentially relevant at a variety of scales and extents, depending on the resolution of the input data. The model is suitable for wide, exposed, uniform coastlines and for complex, heterogenous, sheltered coastlines. Finally, the model also summarizes the coastal population density at the same scale as the exposure index, which can be used to create maps that show the relative vulnerability of human populations to coastal storms.