The Energy Exascale Earth System Model (E3SM) Project is an ongoing, state-of-the-science Earth system modeling, simulation, and prediction project that optimizes the use of DOE laboratory resources to meet the science needs of the nation and the mission needs of DOE. 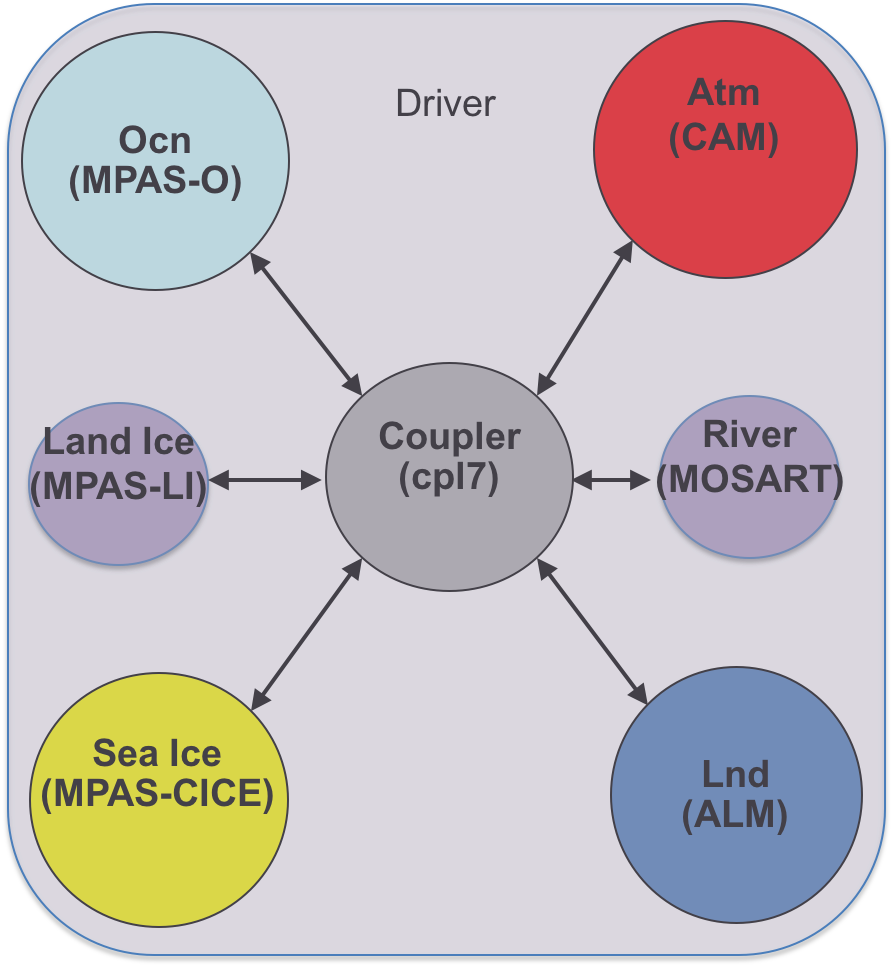 Starting with a version of the Community Earth System Model (CESM1) that we labeled E3SM v0, the team developed the E3SM v1 model to execute the simulation campaign designed to answer our v1 science questions.

The E3SM atmosphere model (EAM) is based on the Community Atmosphere Model version 5 (CAM5): the spectral-element (SE) dynamical core was chosen as the default instead of an option, cloud microphysics, shallow convection, and turbulence parameterizations were replaced; the aerosol parameterization was enhanced substantially, and the vertical resolution was more than doubled (30 to 72 levels). The physics parameterizations have been tested and well-tuned for both low- and high-resolution applications, which is important for addressing our v1 water cycle question.

The E3SM land model (ELM) is based on the Community Land Model Version 4.5 (CLM4.5): new options for representing soil hydrology and biogeochemistry were added to enable analysis of structural uncertainty, with important implications to carbon-climate feedbacks for addressing our v1 biogeochemistry question. 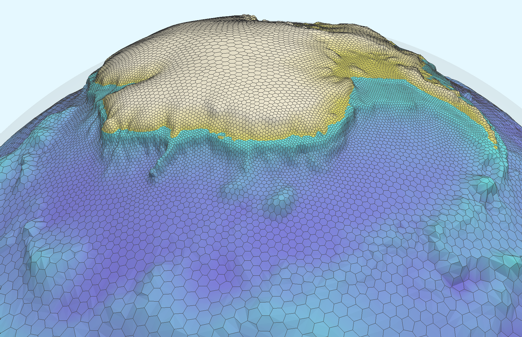 An example MPAS unstructured horizontal mesh around Antarctica, where the ocean component (blues) and land ice component (white) both have refined resolution as they approach the coastline. The bay on the right is submerged below the Filchner-Ronne Ice Shelf.

E3SM v1 includes new ocean, sea ice, and land ice models, all based on the Model for Prediction Across Scales (MPAS) that uses Spherical Centroidal Voronoi Tessellations (SVTs) for multi-resolution modeling, which is important for addressing our v1 cryosphere question focusing on the Antarctic Ice Sheet. These models replaced the ocean and ice components in CESM1 and feature a new capability to investigate the instability of ice sheets by simulating ocean circulation within static ice-shelf cavities.

The river transport model of CESM1 was replaced by a new river model, Model for Scale Adaptive River Transport (MOSART), for a more physically based representation of riverine processes. MOSART can operate on regular lat/lon grids or using watersheds as the computational units. Coupling the new MPAS ocean, sea ice, and land ice models and MOSART river model with EAM and ELM, E3SM v1 features a unique capability for multi-resolution modeling using unstructured grids in all of its component models. This capability will provide the critical support for the v2 simulation campaign that has a stronger regional focus to meet DOE’s needs for Earth system modeling in support of energy-sector decisions.

While some model features developed in Phase I have been incorporated in E3SM v1 to be released in spring 2018, substantial development efforts have resulted in new or improved model features that are being tested for integration in E3SM v2 for the v2 science campaign (v2 Planned Campaign)

The infrastructure team has built a comprehensive infrastructure for code management, development, testing, and analysis from scratch to enable development of E3SM v1 and future versions on DOE Leadership Centers. Leveraging DOE investments, a flexible framework has been developed to provide workflow orchestration, provenance capture and management, simulation analysis and visualization, and automated testing and evaluation capabilities. Despite the significant increase in complexity in v1 relative to v0, the throughput of the model has stayed roughly the same through performance improvement by a factor of 3 to 4 achieved by profiling code, improving algorithms and communications, use of nested threading and vectorization and tuning of parallel I/O.

The project team has overcome significant challenges in building a new model in which four of the component models (ocean, sea ice, land ice, and river) are new and have never been tested in a fully coupled Earth system model before. Issues such as water conservation related to numerical algorithms and exchange of fluxes between Earth system components were addressed by improving water conservation in the atmosphere model and by adding two missing runoff fluxes from ELM to MOSART for routing to the oceans. These have led to significant improvements in water conservation in the coupled model. Addressing water conservation is particularly important for E3SM as our MPAS ocean model explicitly simulates sea level changes, which are sensitive to freshwater inputs. The team also addressed a major challenge in simulating El Niño-Southern Oscillation (ENSO), a dominant mode of interannual variability due to air-sea interactions, with global implications for weather and extreme events. Through teamwork diagnosing and improving aspects of the atmosphere simulation such as surface wind stress and precipitation and aspects of the ocean simulation such as vertical and horizontal mixing that are all critically important for the development of ENSO, E3SM v1 now features realistic ENSO variability and teleconnection that influences precipitation worldwide. The coupled model is now being used in the v1 simulation campaign.