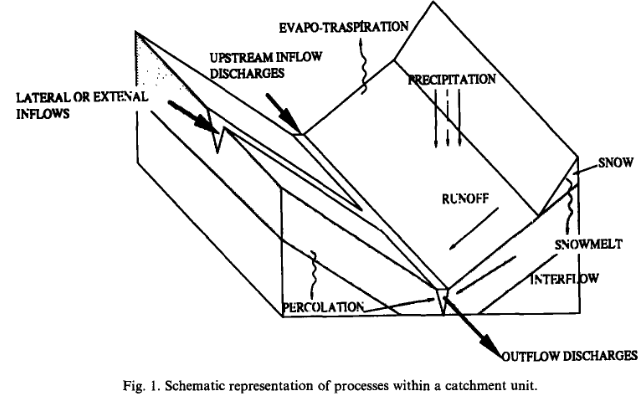 The ARNO model is a semi-distributed conceptual rainfall-runoff model, which is now in widespread use both in land-surface-atmosphere process research and as an operational flood forecasting tool on several catchments in different parts of the world. The model, which derives its name from its first application to the Arno River, incorporates the concepts of a spatial probability distribution of soil moisture capacity and of dynamically varying saturated contributing areas.

The ARNO model is a semi-distributed conceptual model in integral form, which is based on the schematic representation of catchment hydrology shown in Fig. 1.

The main physical phenomena represented in the ARNO model are the following (Fig. 1): water balance in the soil, on the basis of present soil moisture content, rainfall, runoff, evapotranspiration, drainage and percolation; water losses through evapotranspiration, evaluated on the basis of the air temperature data and the soil moisture content; snow accumulation and/or melt, based upon the energy balance of the snow cover (when present) as a function of the air temperature and precipitation data; groundwater flow represented by means of a multiple linear reservoir-type model; overland and channel flow routing represented with linear parabolic models.

The ARNO model is characterized by two main components: the first and most important component represents the soil moisture balance, and the second describes the transfer of runoff to the outlet of the basin. The relevance of the soil component emerges from the highly nonlinear mechanism with which the soil moisture content and its distribution controls the dynamically varying size of the saturated areas mainly responsible for a direct conversion of rainfall into runoff. The second component describes the way in which runoff is routed and transferred along the hillslopes to the drainage channels and along the channel network to the outlet of the basin.