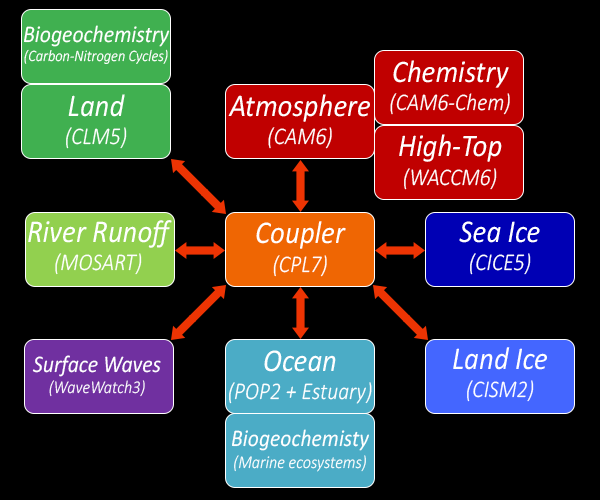 CESM is a fully-coupled, community, global climate model that provides state-of-the-art computer simulations of the Earth's past, present, and future climate states.

CESM2.2 is a new developmental version of the CESM2 family, containing many new developments in several component models since the release of CESM2.0 in June 2018. Some of these new advancements include: a developmental version of CAM, CAM6.3, with new dynamical core configurations and capabilities for the Spectral-Element (SE) and NOAA's Finite Volume Cubed Sphere (FV3) dynamical cores; a new version of WACCM-X, WACCM-X 6.2, that supports CAM6 physics; an updated version of CLM that includes infrastructure and parameterization improvements; availability of a functional version of the Modular Ocean Model version 6 (MOM6); and several bug corrections. As such, CESM2.2 contains answer-changing developments in comparison to the CESM2.1.z series.

The CESM2.2 release is not a scientifically supported version; that is, we do not have any long simulations with this model version yet. Rather, CESM2.2 provides consolidated access to new model developments and features accomplished over the last two years so that any interested community members can access and further develop them.

In most cases, users should continue to use the CESM2.1.z series for their science and especially for CMIP6-related simulations.

The CAM6.3 is a developmental release mostly centered around new dynamical core configurations and capabilities. Further development of the Spectral-Element (SE) dynamical core has occurred since the CESM2.0 release. NOAA’s Finite Volume Cubed Sphere (FV3) dynamical has been incorporated in CESM.

CAM-chem now includes the capability to run the regionally refined grid with the Spectral Element dynamical core (CAM-chem-SE-RR), also referred to as MUSICA-V0 (https://wiki.ucar.edu/display/MUSICA/MUSICA+Home). The CAM-chem compsets now support resolutions for uniform grid SE, and SE with CSLAM. Compsets for physics-side nudging to MERRA meteorological reanalyses are now provided, in addition to the specified dynamics compset. The wet scavenging of aerosols by convective clouds has been updated. The Henry's Law constants used to determine wet and dry deposition of gas-phase species have been updated. Compsets for using the MOZART-TS2 chemistry are included.

New land features that are part of this release include:

The release also addresses several answer changing bug fixes that were present in the released CLM5.0 code and previous versions of CESM2 that include the LUNA and FUN modules. Additional minor improvements were made to the implementation of plant hydraulic stress, snow aerosols, snow and soil hydrology, urban, phenology, and the lake model. Additionally the land-only configuration of the model is set to only run through 2013 with the GSWP3 forcing because of an error in the forcing data for 2014. More information about these changes, bug fixes and ongoing work can be found at the CTSM github repository.

A new option to the Langmuir mixing parameterization is added to enhance entrainment following Li and Fox-Kemper (2017, Doi: 10.1175/JPO-D-17-0085.1). This enhanced entrainment is expected to help reduce mixed layer biases.

A new ocean component model based on the Modular Ocean Model version 6 (MOM6) has been incorporated into CESM and is anticipated to replace POP2 as the default ocean component in CESM3. An early functional release of the MOM6 ocean component is being made available to users beginning with CESM2.2. Instructions for using MOM6 in CESM are available on the MOM_interface Github Wiki page.