Coupling model of GHHM and SHAW

Quoted from: Yanlin Zhang,Guodong Cheng, Xin Li, et al. 2012. Coupling of a simultaneous heat and water model with a distributed hydrological model and evaluation of the combined model in a cold region watershed. Hydrological Processes. 27(25):3762-3776. DOI:10.1002/hyp.9514

SHAWDHM is described in detail, as illustrated in Figure 1. The method for catchment discretization is introduced,and a watershed is discretized into spatially distributed model grids. The topography of these grids is assumed to comprise homogeneous hillslopes on which GBHM and SHAW are coupled. The model components and the coupling strategy are subsequently detailed. 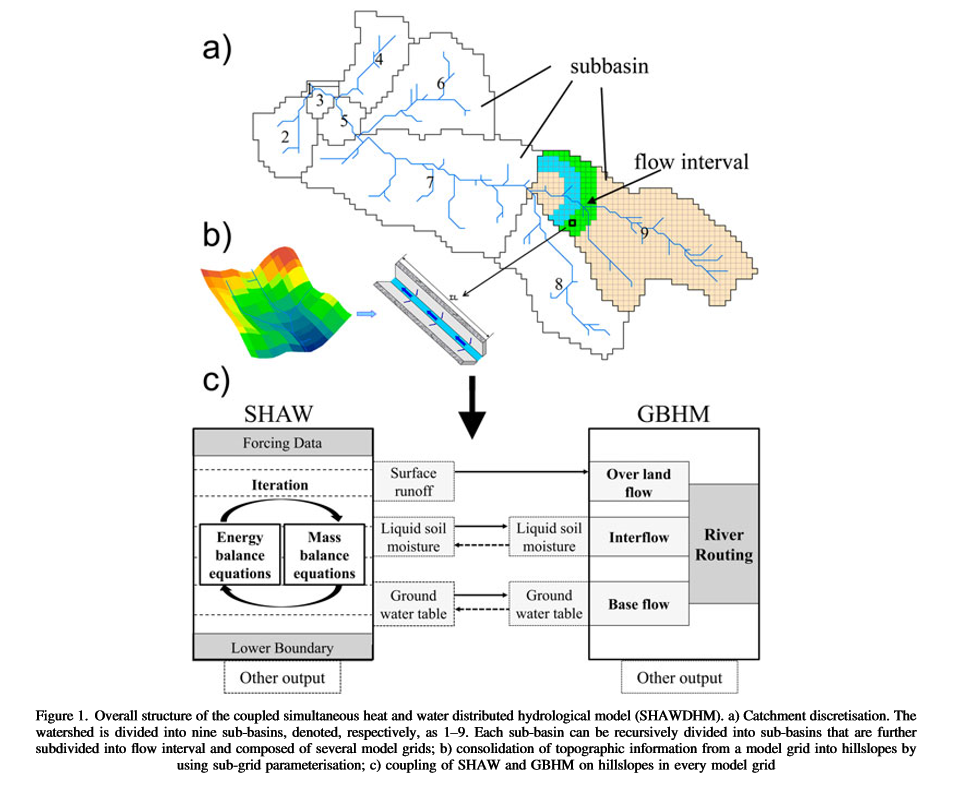 Catchment discretisation. The catchment discretisation was inherited from the grid-based GBHM. As shown in Figure 1 a), a watershed was ﬁrst divided into nine sub-basins based on the DEM by using the method proposed by Pfafstetter. Each sub-basin can also be divided into nine (Pfafstetter, 1989; Verdin and Verdin, 1999). This recursive subdivision procedure had a maximum level of three; that is, a watershed can be divided into a maximum of 729 sub-basins. In each sub-basin, a series of ﬂow intervals can be identiﬁed according to the ﬂow distance to its outlet. This sub-basin and ﬂow interval structure simpliﬁed the river routing procedure. Flow intervals were further divided into several model grids. Thus, the entire watershed was tiled by spatially distributed model grids.

The topography in a model grid was assumed to be hillslopes located along channels, as shown in Figure 1 b). Provided that the total river network length in a model grid extracted from ﬁner DEM is ∑L, the topography in the model grid can be consolidated as a couple of geometrically symmetrical hillslopes of length l=A/2∑L along the river, where A is the grid area (m2). In these virtual hillslopes, the canopy, residue, snow, and soil were divided into multiple layers parallel to the slope. The vertical heat and water ﬂuxes and lateral water ﬂows such as overland ﬂow, interﬂow, and baseﬂow were simulated in the layered system.

Model components and model coupling. The same layered system as that for hillslopes was adopted for SHAW and GBHM, and they were coupled by sharing the same set of variables such as liquid soil water content, ice content, and soil hydraulic properties. In each time step, vertical heat and water ﬂuxes, lateral water ﬂows, and river routing were simulated in a coupled way. The model components and coupling strategy are described in detail as follows.