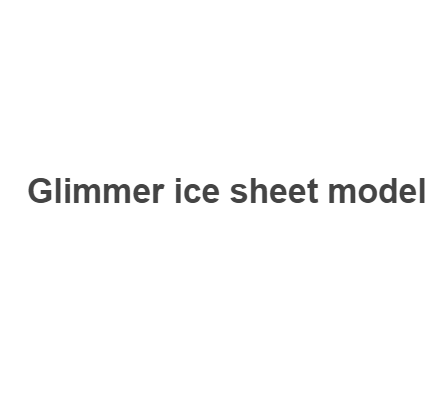 Glimmer-CISM is a land ice model designed to be used as part of an earth-system model or stand-alone model.

The name “Glimmer” was originally an acronym devised to reflect the model's beginnings as a component of the GENIE earth system model [Lenton et al., 2007], and stands for GENIE Land Ice Model with Multiply‐Enabled Regions. However, because Glimmer has developed subsequently as an independent model, the meaning of the name is no longer important, and it is not capitalized.

Use of the shallow ice approximation (SIA) in ice sheet modeling can be traced back to the work of Mahaffy [1976] and the thermomechanical model of Jenssen [1977]. The applicability of the SIA has been discussed at length elsewhere in the literature [e.g., Hutter, 1983; Hindmarsh and Le Meur, 2001; Pattyn, 2003], and although it lacks representation of higher‐order stresses in the ice, it has been shown to perform well compared to full‐stress models in a wide range of glaciological situations [e.g., Leysinger Vieli and Gudmundsson, 2004]. It is also important as a basis for modeling ice sheet evolution over long time scales because of its computational efficiency: numerous recent studies have used models based on the SIA [e.g., Calov et al., 2005; Charbit et al., 2005; Abe‐Ouchi et al., 2007; Flowers et al., 2008], and, accordingly, it continues to be the subject of theoretical analysis [e.g., Saito and Abe‐Ouchi, 2005; Van den Berg et al., 2006]. Nevertheless, the use of the SIA precludes the simulation of many of the rapid changes now being observed in Greenland and Antarctica.

Given the well‐established nature of Glimmer's theoretical foundations and its numerical implementation, it is important to stress the characteristics which distinguish it from its predecessors. First, the model has been verified against a range of established standards, allowing a high degree of confidence to be placed in its output. Second, the software engineering design of the model, and its open development process, have produced model code that is well structured and well documented. The design of the code is such that it is easy to deploy the model in a range of experimental configurations, and to couple it to whatever climate forcing is desired. Finally, Glimmer is supplied with a sophisticated module (called GLINT) which allows coupling to a global climate model or reanalysis data, and which automatically handles the various temporal and spatial transformations necessary. Taken together, these characteristics mean that Glimmer is well suited to the adaption and extension of its capabilities.

All numerical models are approximations to reality: all make compromises for the sake of efficiency and tractability, and, in this, Glimmer is no different. Most significantly, the use of the SIA precludes the direct representation of ice shelf flow, because the stress balance in an ice shelf is dominated by longitudinal and lateral stress gradients, which are absent from the SIA. Some ice sheet models [e.g., Huybrechts, 2002] attempt to overcome this by including a separate ice shelf model; however, the difficulties presented by doing so are significant [Vieli and Payne, 2005], especially concerning the coupling of the two models across the grounding line. Consequently, Glimmer does not include an ice shelf model at present. Other compromises described below include the simplicity of basal sliding and basal hydrology models, and the parameterization of calving at a marine margin. None of these limitations is unusual in a model of this kind. However, because of Glimmer's status as an open source, community model, and because of the well‐structured nature of its code base, it presents a unique opportunity for the coordinated improvement of these aspects. One of the purposes of this paper is to stimulate that development.